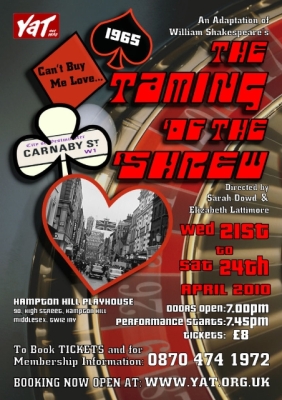 YAT's modern twist on a classic love story set in the 1960's casino underworld - the perfect backdrop for this much loved Shakespearian story of betting on love.

The Taming of the Shrew
by William Shakespeare

Baptista Minola is an Italian immigrant Casino Boss, with two daughters she is desperate to marry off to the most eligible men.

Katherine the 'shrew', is the abusive, angry and extremely strong willed daughter, who needs to be 'tamed', unlike Bianca, the youngest, who is sweet, beautiful, and more than happy to adhere to her mother's wishes!

When professional gambler Petruchio enters their lives, much hilarity ensues, which culminates in the big question, will he ever 'Tame the Shrew'?

Review by Heather Morgan for TTC's Theatre Magazine (May 2010)

Anyone who missed YAT's latest offering really lost out on an hilarious night's entertainment and "will think themselves accursed they were not here" (Henry V, same playwright).

This winning team of directors, who last year gave us a polished production of Pride and Prejudice, have again struck gold. They up-dated this troublesome comedy to 1965, in the heat of Beatlemania, transferring the setting from Padua to Carnaby Street, the heart of swinging London. The opening scene when the Fab Four, complete with mop-head wigs, were pursued by a streaking crowd of young girls in wonderful 60's dresses, straight out of Mary Quant. A wonderful moment occured when the four boys (or girls? This is YAT after all) managed to hide themselves inside a genuine old red phone box down stage right. What a piece of set dressing.

At this point I'd like to mention the clever stage design and wonderful backdrop of Carnaby Street painted by Catie Atkinson, and to congratulate Emma Woodley for the very 60's hairdos and make-up; also the indefatigable Eileen Baker for her unerring flair in the wardrobe department. It could have been Twiggy herself in the short-skirted wedding outfit and white tights.

I call this a troublesome comedy for so it is in these post-feminist days. The boorish behaviour of the protagonist Petruchio towards the admittedly awful Kate is not very laughable, but I bet the groundlings in Shakespeare's day found it hilarious! Jason Evans who undertook the role of the swaggering "hero" played it with a vengeance, obviously enjoying humiliating his shrewish bride in front of his friends and her family. Jason was totally believable and his tall stature added to his dominance of Katherine. I enjoyed his delivery direct to the audience, drawing us in to his caddish plans.

But what of Katherine? What a complex part! Why is she so badly behaved? It can't just be sibling rivalry with her sweet, compliant sister Bianca that makes her so disagreeable. There must be more to it than that. It would be interesting to know how this was played by a male actor in the 17th century. Now we (well, I do anyway) want to hear Kate's speech of submission at the end of the play spoken with tongue in cheek and a surreptitious wink to her conspirators when she exhorts them to give in demurely to their husbands every whim. Stephanie Von Wiera played this role with complete conviction and these two young actors took up these challenging roles with great spirit, both vocally and physically. In fact, such was their physicality that I feared for all who got entangled with them.

The plot is too complicated to attempt to retell it, but all supporting roles were played with gusto and conviction. The role of Kate's father was wisely changed to that of a successful controlling businesswoman, Baptista Minola. She may have been a great manager of her casino, but she clearly had no idea of how to deal with her awkward daughter. Great vim and vigour went into the playing of this part by Stephanie Mott. Petruchio's sidekick (literally), Grumio, was played with great comic timing by Michael Bishop. He was equalled in his comic acting by Hana Patrice Lewith, who despite, or because of, her diminutive stature and curly grey wig induced roars of laughter from the first-night audience with her portrayal of an Irish merchant on his first visit to London. I hope Michael and Hana will not be offended if I call them the Little and Large of Youth Action Theatre.

The pace was fast and furious and for once I do not find it necessary to remind YAT actors to remember to enunciate clearly. Top marks all round, even with the minor characters who all clearly enjoyed joining in the general mayhem with enormous energy. Oh, to be young again. I came on my birthday and from the first strains of Hard Day's Night I knew I was in for a great birthday treat. Thank you YAT generally and Lizzie and Sarah in particular. Thanks Betty Robottom for remind me to come and see it.

I guess this is what might be called a rave review. I am now looking forward to more Shakespeare to follow from TTC and BROS. I have no qualms about updating Shakespeare. Bring it on.