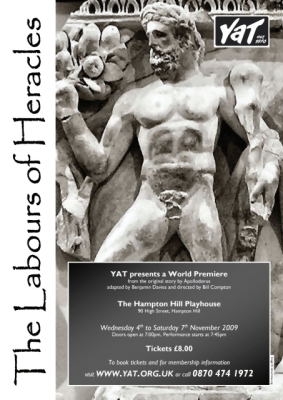 Born the son of Zeus to a mortal mother, Heracles is tricked into killing his own wife and children by the vengeful and jealous goddess Hera.

In return for an expunging of his guilt, Heracles agrees to perform ten tasks. However, little does he realise the full extent of Hera's hatred or just how far she is willing to go to avenge her Husband's infidelity.

With a humorous take on the classic Greek legend, this adaptation brings us Gods and Monsters; Guys and Dolls; Slaves and Lovers and of course, unfeasibly large snakes.

YAT are fortunate to have amongst their alumni a playwright who has written a piece ideally suited to their many and varied skills. Myths and Legends have enduring appeal; and there are few more thrilling and appealing than the exploits of a hero like Heracles.

YAT rose well to the challenge that Ben Davies set them as a youthful group their skills lie in their energy, their ingenuity and their daring. Like Heracles they were not daunted by the tasks set before them. They designed and constructed a well conceived and solidly built amphitheatre, the tiered seating rising on both sides of the stage. This was used to create different levels of groupings, exits and entrances. It was especially well used in the colourful scene depicting the slaying of the many headed Hydra.

Equally successful was the use of a suspended screen. This was used to project the image of the skies in the Atlas scene. This was then back-lit for the wholly delightful shadow puppets representing the ravaging Stymphalian birds. I particularly liked the image of Heracles killing the Erymanthian boar, reminiscent of the lively friezes that decorate antique vases.

I wondered how director Bill Compton would cope with the scene of the horrendous labour of cleaning out the Augean stables. Fortunately for him (and the audience) Ben Davies had written a graphic description directed by an eyewitness!

The play was held together by the witty and humourous narration of Apollodorus himself with the aid of Castus his slave. Their bits of knockabout were entertaining, whilst the Naiads performed the role of Greek chorus with graceful movements and clearly enunciated good choral speech.

At the risk of being a bore I should like to remind actors who are still learning their craft that it is not enough to shout to be heard. It is however, very necessary to speak clearly and distinctly and to vary the pitch of one's voice. As it happens I had attended a lecture on "vocal health" (ie. voice production) during the day that I came to see YAT's performance and what I was reminded of was that it is never a waste of time to do vocal warm up exercises and never a fault to slow down your delivery in the interest of audibility. Pace will not suffer if you can be heard.

I have congratulated the craftsmanship of YAT's props and special effects makers in former productions and I am pleased to do so again. Terrific!

I really enjoyed this production and I look forward to more myths and legends in the future. Congrats once again to your hardworking director and talented team of backstage and front of house support.