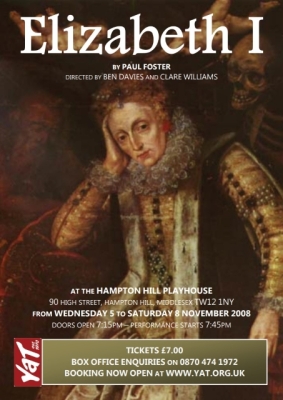 History is a subjective thing.

Ask a Spaniard who Elizabeth I was and (if they even know who you are talking about) sooner or later the word "Sorceress" or the less charitable "witch" will come up. Ask a Brit and the chances are you'll get a quotation from Elizabeth's speech at Tilbury about having the body of a weak and feeble woman.

The image of the Warrior Queen is a powerful one but the truth, whatever that means in a historical context, lies somewhere in between.

A powerful leader? Yes. A despot? Perhaps. A virgin? Well...

The American playwright Paul Foster has his own very special take. His Elizabeth emerges as a reactive pernickety house wife, as sharp on finances as she is short on clarity. Beset on all sides by enemies, foreign and domestic, she emerges finally from her father's shadow as Glorianna personified. Foster's observation that she'll drive the historians insane, is a view that he helps confirm rather than quash. In what is a fairly weighty period of our history the playwright has thankfully trodden the slightly more humorous path, for the best histories take their subjects seriously rather than solemnly.

Elizabeth I
by Paul Foster

Late 1500s, the apogee of Elizabeth's reign. A touring company of Elizabethan players performing their version of 'Elizabeth I' on a street platform in Shoreditch, London.

We've had an abundance of the Tudors lately, so we should all be "clued up" about 16th Century England, as we see a group of strolling players perform their version of QE1 on a Street Corner. It is, as the programme told us, American author Paul Foster's own "very special take". I am not sure what that means, since it appeared a burlesque - a mock-serious commentary, which is one definition of the word, on Elizabeth I (at least up to 1588), but it did not seem to develop Elizabeth's character over-much, so I am not sure exactly what it was trying to do, but mine not to reason why, but to look at the finished product, and see what came about.

Whatever Mr. Foster's intention was, how should it be played? Presumably "mock" and "serious"- logically both, but there you have the problem as to what is real and what is being burlesqued - are we looking at real people, or the author's commentary on them, as portrayed by the strolling players? Moving on from that, do I look at the actors in the context of the roles they were portraying? I think I have to: "All the World's a Stage" after all, and the production switched between reality and burlesque/comedy, but the joins were uncomfortable in places.

However, I'll start with the credits, and there were many: a fast-moving, superbly staged and choreographed production by Ben Davies, some stunning lighting - the silhouette scene in particular, earning a well-deserved round on the night I was there - well chosen music, a sparse decor, with a chess-set floor (political manoeuvres in the 16th Century?). The cast's enthusiasm and discipline was most noticeable, so was the ensemble playing, and my congratulations go to everyone who popped in and out of differing 16th Century characters so slickly and so well.

When I come to performances, I have to return to my question of what the play was trying to do. It is almost impossible to comment on everyone, since there were so many doubles in small roles, and little or no chance to develop any character, but cameos were very much in evidence, so I really have no choice but to commit my observations to the major roles. There were three outstanding realistic performances. First and foremost, Rowan D'Albert as Leicester. Rowan has a commanding presence, is strong and commanding in his delivery, and was totally believable in his characters (he doubled as the Lord Mayor). I must express admiration for his final, colossal speech, taken at full flood, which should have merited a Round in itself.

Then, Antony Antunes as Philip II - same accolades. The fervour and bigotry which Philip possessed, although lampooned, in this play, still came across, and told most strongly. Finally, Hannah Ledwith as Burleigh, who strongly made her mark in a rather fragmented, but telling, part. Again, she has presence and command. These are actors to watch.

However, their undoubted strengths made me question the other leading roles; the above players gave us Elizabethan England, but elsewhere I felt there was a confliction of acting styles, and an intrusion of modernity, which brings me to two of the Queens.

There is no doubt in my mind that Hannah Thompson (Elizabeth) and Anna Stumpf-Condry (Catherine de Medici) are very capable actresses, Hannah in particular having a nice throw-away touch, and some good comic timing; both possessing a regal and commanding presence, especially Anna, (but I worried about her skittish entrances, which she was obviously required to do, but I couldn't see the reason for them). Once those were over, she convinced me, as the "bete noire" of the Valois Court with Medici craft.

However, vocal command was not as it surely should have been, by both Queens, but particularly in the Armada sequence, when I sensed that burlesque had become reality. Elizabeth's final speech before the curtain must surely be stronger than it was. Hannah gave us splendid reminiscences of Miranda Richardson, but, whilst acceptable en route, it is, in the end, superficial and Hannah was not allowed to go further to the point where we get to "I am Gloriana"; otherwise, why is the play called "Elizabeth I?"

Was this a Directorial lapse? I feel so. The programme according to Mr. Foster, stated that she emerges from her father's shadow as "Gloriana Personified". That, for me, did not happen, and I saw little, if anything, in the text to justify this, so I do not criticise Hannah in this respect, but I came away thinking that Mr. Davies had presented a highly entertaining evening, which I would not have missed, but he had not probed as deeply as perhaps he could have done, and had moreover not moved Elizabeth in particular to a convincing climax, so as to give us that personification with which the play must surely end. Then, the epilogue, as spoken by Elizabeth, becomes a summing-up of her, and her era, to its crisis point in 1587/88. This last was a draw-back of emotion, and, again, I wanted more. To use a Victorian term, it is jingoistic, but not to play it as such threatens anti-climax, and the curtain came down somewhat unsatisfactorily in this respect.

This has been a difficult review to write, and I may be misconstruing Mr. Davies' and the play's intentions, but there were no "passengers" in this production. Everyone made a contribution and the sense of enjoyment in so doing was most noticeable. Having seen, and indeed reviewed, several YAT shows, I continue to be optimistic and enthusiastic with what I have experienced What I am chiefly convinced of is a plethora of talent and commitment. YAT has done great things: they will assuredly go on to greater horizons.