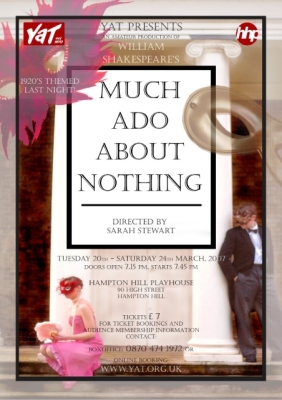 Much Ado About Nothing
by William Shakespeare

"When I said I would die a bachelor, I did not think I should live till I were married."

Four lovers kept apart by masks, underhand schemes, secrets and constant misunderstandings. Rapier wit and cutting observation; lies, laughter and love, with a stiff dose of betrayal and only a hopeless band of Constables to save the day. In one of Shakespeare's funniest and most irresistible comedies, Beatrice and Benedick pass the time goading and scorning each other until a cunning plan is devised to bring an end to the battle of the sexes. When they are finally thrown together to defend Hero's honor, their true feelings begin to be untangled.

Set outside Leonato's country villa, Don Pedro and his men return from war and prove to be entertaining guests for the Governor of Messina, his daughter Hero and Beatrice, his niece. The play takes us on a fast paced journey through weddings, funerals and masked balls, fuelled by plotting and confusion. In a society obsessed with appearance, nothing is as it seems? and everything is overheard!

Much Ado About Nothing is one of Shakespeare's earliest and most popular comedies, still thriving around the world over 400 years after it was written. Anyone who says they don't 'get' the Shakespearian comedies needs to see this; funny yet emotional, passionate yet light-hearted, Sarah Stewart's production had more drama than an episode of Eastenders, and a stylish 1920's setting.

On opening night of YAT's Much Ado About Nothing I set off with nothing but my notebook and pen to keep me company; my two friends having deserted me at the last minute due to an injured back and a new job. So, about to go to a theatre I had never been to, to watch a play I had never seen performed, on my own, I must have been almost as excited and as nervous as the cast waiting to perform.

The bright white and gold set with its Venetian-style balcony, ornate white bench and long cotton drapes was striking to say the least. Two small fig trees in terracotta pots sat at either side of the stage, while two vases of peacock feathers sat further back, bringing the first splashes of colour to the set like the garnish to an empty plate.

The play follows the events around the governor Leonato's wealthy Italian family while the Prince Don Pedro (Kate Sayers) and his soldiers arrive and then stay as guests in Leonato's home in Messina. The moment they arrive, one of the company, Claudio (Josh Duhigg), falls in love with Leonato's daughter, Hero (Hannah Ledwith). He quickly proposes marriage, which she just as quickly accepts, but, as in all Shakespearian plays, and real life, they don't live happily ever after just yet. The lovers' happiness is soon disrupted, as on the evening before their wedding Don Pedro's villainous brother Don John and his slimy helper Borachio trick Claudio into believing that Hero has other lovers, leading Claudio to publicly accuse and abandon her at the alter.

The cast themselves dressed as wealthy Italians of the 1920s, with the female lead, Hero, showcasing at least four different dresses and a range of brightly coloured and jewelled accessories throughout the show, including a wedding outfit of a silky, gold-coloured dress, elbow-length white gloves and pearls. During the pre-set, Hero and her cousin Beatrice (Charlene Sargeant) sat downstage in silent, playful conversation, while other characters drifted in and out of the scene around them. Watching them, the actors seemed to go from shy, uninteresting movements to over-exaggerated expressions. Luckily the pantomime-style gestures stopped within two minutes of the play starting, and from there the audience were taken on a journey as rough and unpredictable as (to continue the Eastenders analogy) Phil Mitchell after a pint.

The characters in Much Ado About Nothing were varied personalities to say the least: Leonato (Tom Kirkin) was a convincingly protective father, looking crushed by the accusations about his daughter, and quick to defend her honour afterwards. At the same time, Dogberry (Michael Bishop) and his misuse of English are still funny now, as he leads one of the most pathetic neighbourhood watch units you will have ever heard of.

Stewart's Borachio (Asha Gill) was a hilarious and strangely likeable rogue, speaking in a more common accent than the other characters and moving more like a hand-rubbing dodgy dealer than an evil man. Don John (Daisy Jo Lucas), on the other hand, was a typical scheming, forceful villain, like Iago in Othello, who uses Borachio to do all the dirty work for him and then leaves when their lies are discovered.

Meanwhile, Beatrice and Benedick (Charlie Jamieson Beesley), a Lord in the Prince's company, are brought closer together. Beatrice is a feisty, lively character who cares for her cousin as though they were sisters. While Hero and Claudio seem to have been cast as the perfect couple in terms of appearance and personality, Beatrice and Benedick may be the 'realistic' couple. They clash fiercely on every level until they finally give in to their feelings, at which point you see that they may be more like the real couples we meet every day; full of contrasts and bickering, but in love, nonetheless.

I am glad I took the chance and went to see YAT's Much Ado About Nothing. Director Sarah Stewart and her team managed to turn a great story into a believable, funny and heartfelt production. The odd slip of the tongue popped up, but what opening night ever ran flawlessly? The actors evidently put their all into a play which still screams volumes about love, life and lies.