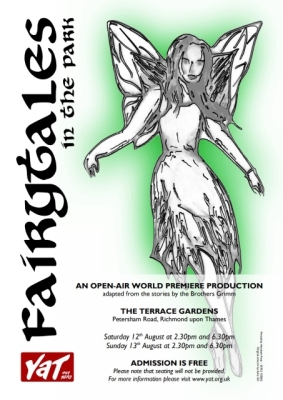 YAT have taken some of their favourite fairytales and put them together in a play suitable for all ages. With many different characters and lots of familiar stories, it is filled with adventure, romance, comedy and tragedy!

Fairytales in the Park
by YAT

Based on the well known stories by the Brothers Grimm.

Join their storyteller, Quizzlepomp, as you are guided through a magical land where anything is possible and where everyone gets along? or do they?

Meet Ellana, the heroine, and her unlikely hero the Frog Prince. Watch their tale unfold as they meet strange folk from all over the magical kingdom, each revealing their own story.

Written and directed by the members themselves, Fairytales in the Park brought together many familiar stories and faces from the tales of the Brothers Grimm into a production which was suitable for children of all ages.

Despite thunder, lightning and heavy rain for most of the weekend, the four performances; two on Saturday 12th August and two on Sunday 13th August; went ahead with only a light shower during the third performance.

Nine members of YAT made up the performing cast with the action initiated by a bizarre exchange between a talking bush (Steph Wiera) and the narrator Quizzlepomp (Stephanie Mott) who went on to lead us through the dramatic intricacies of the plot featuring comedy and tragedy in equal measure.

As the lovelorn Princess Ellana (Annie Kanani) strolled between the flower beds mourning the recent death of her father, she befriends a charming green frog (Miles Orru) unbeknownst to her, of course, a bewitched Prince Charming.

Coupled with the obligatory boos and hisses, we were greeted with the appearance of the evil and monstrous Odette the Vile (Michael Bishop) who is stepmother, to Hansel and Gretel (Adam Brett and Clare Younger) and wife to their subservient father, the Woodcutter (Tim Patrick). The attempts by Odette to rid herself of the unwanted children by abandoning them in the woods are repeatedly thwarted and, after finding the house of sweets the children encounter the Witch (Steph Wiera) and narrowly avoid being fattened up for her consumption.

No compilation of fairy tales would be complete without the appearance of Red Riding Hood (Asha Gill) and The Wolf (Adam Brett) masquerading as Grandmother and this play is no exception.

The multiple themes and crossing of stories are finally drawn together when Prince Charming is released from his spell by a kiss from Princess Ellana who had rejected other suitors on the basis of their smelliness, thinness or masculinity. The play culminates with their marriage ceremony and all - well with a few exceptions - live happily ever after.

Proof of the old adage that it is hazardous to perform with animals was amply demonstrated when a resident squirrel seized a French loaf, an essential prop to the action, and made off at high speed into the bushes with members of the cast in hot pursuit. Fortunately, the loaf being some four times the size of the animal, possibly coupled with the extraordinary costuming of the pursuers, caused the squirrel to abandon its catch.

All four shows were free of charge and very well received by the estimated two-hundred adults and children that attended.