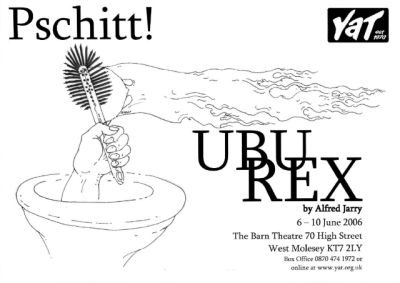 Thus Pa Ubu sets us off on a magical, savage and often filthily funny trip through a Macbeth for the Victorian equivalent of the happy slapping generation. With its bad language and schoolboy humour, Alfred Jarry's first and most influential play scandalised Paris in 1896 with its wicked story of Ma and Pa Ubu, two gloriously evil megalomaniacs, who spur each towards regime change in their native Poland. Aided and abetted by his wife, Pa Ubu rises to power by assassinating the King. But even the kingdom is not enough. Having increased his wealth through the execution of his subjects he is finally driven out by the Russian Army and flees. Widely recognised as the first step on the path to absurdism, Dadaism and Artaud's theatre of blood, Jarry takes us on a bizarre and chaotic journey across the landscapes of Macbeth, Don Quixote and Commedia in a weird, wonderful and often vulgar world.