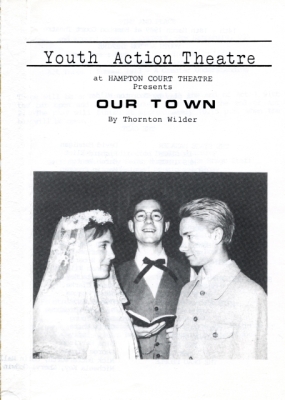 A simple but charming portrayal of ordinary people being born, growing up, falling in love, getting married, having children, and dying, in a typical small town at the turn of the century, which although set in America, is universal.

Our Town was described when it was first seen in New York as "...a wonderfully evocative play...hauntingly beautiful".

Played on an empty stage, it draws on the imagination of its audience to set the scenes for occasions that most of us live through. It has tremendous power and is suitable for all the family to watch.Our Town
by Thornton Wilder

Review by John Thaxter for Richmond and Twickenham Times (March 1989)

Thornton Wilder won the Pulitzer Prize in 1938 with Our Town, and is leisurely portrait of a New England town at the beginning of the century has been a recurring favourite on Broadway.

A sort of Under Milk Wood without the laughs and the vulgarity, it flopped in the wartime West End, but because of its large mixed cast, basic sets and air of restrained optimism, it has long been popular with British amateur companies.

It would seem a natural for Youth Action Theatre who staged it last week for five performances at Hampton Court Theatre. But on the first night Eric Yardley's production was strangely subdued, lacking YAT's normally vigorous ensemble style.

This was no fault of David Hannigan, who brought warmth and immediacy to his performance as the garrulous Yankee stage manager, a go between for the author and his characters, addressing the audience directly and sometimes off the cuff. This was a feat of memory and another fine characterisation by a talented young actor.

I also admired the way Cath Hardy and several members of the cast achieved stage maturity as much through movement and stance as by costume and make-up.

The most vivid ensemble scene came in the graveyard as the Dead People quietly converse and observe the unwitting living. This included a touching contribution by Lynn Howes as a young wife, newly-dead before her time, returning briefly to observe a birthday in her childhood.