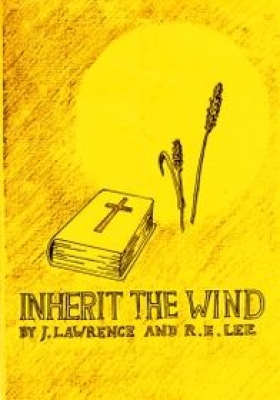 To quote the authors:

Inherit The Wind is not history. The events whcih took place in Dayton, Tennessee during the scorching July of 1925 are clearly the genesis of this play. It has, however, an exodus entirely its own.

Only a handful of phrases have been taken from the actual transcript of the famous Scopes trail. Some of the characters of the play are related to the colourful figures in that battle of giants; but they have life and language of their own - and therefore names of their own.

The greatest reporters and historians of the century have written millions of words about the 'monkey trial'. We are indebted to them for their brilliant reportage. And we are grateful to the late Arthur Garfield Hays, who recounted to us much of the unwritten vividness of the Dayton adventure from his own memory and experience.

The collision of Bryan and Darrow at Dayton was dramatic, but it was not a drama. Moreover the issues of their conflict have acquired new dimensions and meaning in the years since they clashed at the Rhea County Courthouse. So Inherit The Wind does not pretend to be journalism. It is theatre. It is not 1925. We set the time and place 'Summer. a small town, not too long ago.' It might have been yesterday. It could be tomorrow!Inherit The Wind
by Jerome Lawrence and Robert E Lee
The accused was a slight, frightened man who had deliberately broken the law. His trial was a Roman circus. The chief gladiators were two great legal giants of the century. Like two bull elephants locked in mortal combat, they bellowed and roared imprecations and abuse. The spectators sat uneasily in the sweltering heat with murder in their hearts, barely able to restrain themselves. At stake was the freedom of every American.

One of the most moving and meaningful plays of our generation.

Review by John Thaxter for Richmond and Twickenham Times (April 1988)

In a cynical moment James Agate once remarked that a drama critic's prime duty was to write readable copy. So much for recording angels and self-appointed protectors of the ticket-buying public.

But in recent years many critics writing about student or youth theatre have accepted an additional duty to promote and encourage young talent while soft-pedalling any negative aspects of 'prentice work.

And it was in that indulgent frame of mind that I approached last week's Youth Action Theatre production of Inherit The Wind at the Hampton Court Theatre, secretly prepared for a dull but worthy evening.

Famously silmed by Stanley Kramer 33 years ago, it then starred Spencer Tracy and Fredric March as a free thinking defence lawyer and a vote-catching fundamentalist, horns locked in legal combat. A fictional replay of the 1925 'Darwin monkey' trial set in America's bible belt, the confrontation leant heavily on the charisma of its seasoned stars. So how could a young and inexperienced company life this drama off the page?

In the event Eric Yardley's production in tandem with co-director Jean Brown proved to be an exciting courtroom tussle, played with complete conviction by Nick de Kerckhove as the hard-bitten Chicago lawyer and David Hannigan as his bigoted Southern opponent.

And no allowances were needed for these finely detailed, mature performances. Indeed, on the strength of them the production could have been offered to a wider audience for its sheer entertainment value.

Weakness is resolving in the story, including an overly convenient off-stage death, belong to authors Jerome Lawrence and Robert E Lee rather than the YAT production.

The two central roles were supported by a large, well-costumed and well-rehearsed cast of young platers - for once enjoying the vocal benefit of dropping their Middlesex woodnotes wild in favour of (more or less) Tennessee accents.

Emma Higginson matched the strength of the central roles with an attractive performance as the preacher's daughter torn between heart and home, as did Richard Eliot's cameo role as the newpaper man who's seen it all before, and David Wheatley as the Reverend Jeremiah Brown.

The cross-stage setting was designed by Graham Osborne, with costumes arrange by Eileen Baker, Winsome Weatherstone and Nora Bethell. This play was previously staged by Eric Yardley with the senior TTC company. His new production for Youth Action Theatre was entered for the Arts Council amateur drama awards.