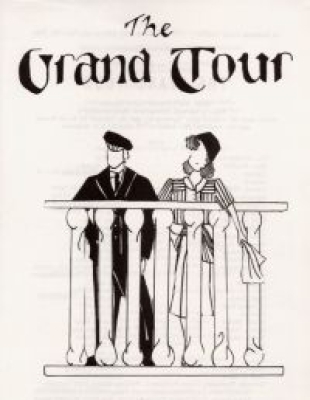 The Grand Tour
by Franz Werfel
Book by Michael Stewart and Mark Bramble. Music & Lyrics by Jerry Herman
Set in 1940 France an unlikely team pair up to evade the approaching nazis. Little Jacobowsky, a polish jewish intellectual has been one step ahead of the nazis for years. Stjerbinsky is an aristocratic, anti-semitic, Polish Colonel who is trying to get to England. Jacobowsky has a car but can't drive. The Colonel Can and so begins their journey. Accompanied by the colonels girlfriend Marianne they go to a carnival, a jewish wedding and onto a train when the car breaks down. Jacobowsky falls in love with Marianne but it is not to be. He leaves the two to begin his own grand tour of life as the curtain falls.

Jenny Lee, when Minister for the Arts, commented to Youth Action Theatre Director, Eric Yardley when she arrived for a performance "The Hampton Court Theatre is the best kept secret in the country". I found my way, compass in hand, to confront the same Director at the same theatre for The Grand Tour. This struck me as a peculiarly apt title when I eventually emerged from the bushes concealing the entrance to the mansion which houses the theatre. Not a signpost in view, which Eric Yardley explains is not permitted to a Theatre Club.

This seems both odd and regrettable and prompts the query, how many prospective customers have been lost for ever in the labyrinthine depth of the gardens surrounding Hampton Court's delightful theatre? The quality is most certainly there, judging from this treatment of Franz Werfel's original play Jacobowsky and the Colonel, which S N Behram translated for the American Theatre and which Jerry Herman wrote the lyrics from the book by Michael Steward and Mark Bramble.

This is the first production in England of the musical, which had a successful run in the USA with Joel Gray in the lead, although people with long memories may recall Danny Kaye in the 1958 film version known as Me and the Colonel. Mention of these two stars gives a fair indication of the nature of the lead character, a man whose apparent simplicity leads him triumphantly through the most dangerous and taxing situations, ahead of the autocratic Colonel who joins him and other companions in an escape from the Nazis in war-torn Europe. Eric Yardley has had the good fortune and prescence to pick on Joe Early, a young man with little stage training, whose combination of good looks, ingenuousness and the ability to find his way through Jerry Herman's sometimes tortous lyrics suggest that he could have a promising future in the straight theatre if he were to work for it.

He leads a large cast - 50 by my count - with charm and enthusiasm through this most ambitious exercise for the group; Darryl Day plays up diligently as the Colonel, the stage is cleverly deployed to suggest the Grand Tour through Europe, Graham Osborne's setting is ingenious and full marks to MD Duncan Jones and choreographer Kim Scott. A brave venture, bravely executed.