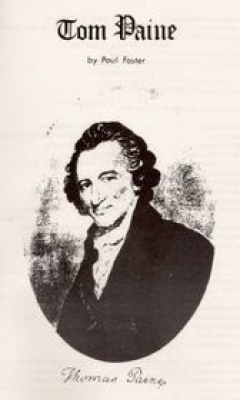 "These are the Times that try Men's Souls" - T. Paine

The 18th Century was both an age of elightenment and an age of revolution. No man more dramatically embodied the power of ideas whose time had come than did Thomas Paine. It was he who translated the new concepts of inherent human rights and the need to question and, if necessary destroy outdated institutions, such as hereditary right to rule, into words that stirred the hearts and minds of common men to action. His writings were key factors in both the American and French revolutions.

This is in no way a realistic and ordered portrayal of the Life and Times of Tom Paine. What we are attempting is an impressionistic vision of the turmoil, achievements and charisma of this turbulent but remarkable young man. Few of us had little idea of this man before we started rehearsal but for the past two months, the local libraries have been drained of all reference books on the subject - YAT has been researching.

Like many folk heroes, legends have grown up around him; the establishment in his own country England, he was tried for treason, in the United States, which he helped create and in France where he helped establish a republic, all tried to villify and discredit him after his death. So the truth of the man is difficult to discover.

In America, he wrote "Common Sense" which fused colonies into a fighting force to separate from England. In this country he wrote "The Rights of Man" which questioned the right of anyone to rule by birth and was tried for treason. In France, in prison, he wrote "The Age of Reason" which many consider anti-Christ particularly the God-fearing Americans. So in his final hours he was rejected by all three countries and died in poverty and alone, save for a few friends.Tom Paine
by Paul Foster