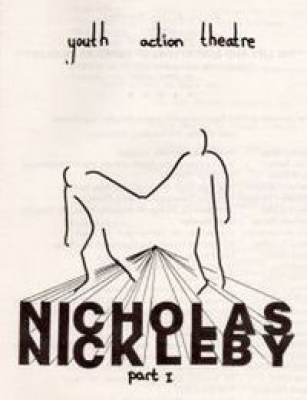 Nicholas Nickleby - Part I
by David Edgar
Novel by Charles Dickens. Music by Stephen Oliver
A brilliant recapturing of the sights and sounds of Victorian England, and the touching, funny, exhilarating saga of the virtuous young Nicholas as he meets and masters the challenges of poverty and corruption. In the end the play is a soaring affirmation of man?s essential goodness--a thrilling, eloquent rendering of the diverse people, places and events which, in Dickens? time or in ours, make up the real stuff of life and draw on the deepest resources of the human spirit.

As Clive Barnes puts it: "The greatness of NICHOLAS NICKLEBY is breathtakingly simple. The play flies. And it flies back-wards. It takes you to a world of sentiment and passion glimpsed before but never known."

Those of us lucky to have been at Hampton Court Theatre last week for one of Youth Action Theatre's performances of the first part of David Edgar's monumental dramatisation of Nicholas Nickleby will long remember the occasion as one of the most stimulating that this talented group has given us.

Although Dickens' novel does sprawl somewhat, Edgar has managed to translate the richness and variety to the stage without too much artifice but with a feeling for the way in which the many strands of the novelist's coalesce into a coherent picture.

And director Eric Yardley persuaded the huge cast into a vivid and intense portrayal of this slice of early-Victorian England.

I think what I like so much about this version of the story is that Edgar does not dispense with too many of the minor characters in order to preserve the storyline too slavishly, and so the many vignettes gave these young actors opportunities to create three-dimensional people rather than cardboard cutouts.

What was most remarkable was the way in which, no matter how exuberant things became, the sense of a team presenting a slice of life never was lost. It was a remarkable achievement.

Most of the actors took several parts, slipping from one to another with remarkable confidence, whether they were the doomed Dotheboys Hall boys, members of the exuberant Crummles travelling theatre, or simply members of a crowd.

The brunt of the action was carried, of course, by Nicholas himself, played with elegance and style by Chris Walters. He was supported magnificently by David Richmond as Smike, whose smile as he leapt on to Nicholas's back at the close of Act I hardley needed the burst of stage light so radiant was it.

David Brown made an interesting study of Ralph Nickleby, suggesting the man's emotional poverty rather than laying it on with a trwel. Jeremy Gunn drew sympathy with his Newman Noggs and Nick Wilson much delight with his Mr Crummles, while David Gray's Mr Squeers was horrible, yet never tipped too far into caricature.

The ladies have a more difficult time in this play, but Bronwen Davies made a lovely Miss Petowker, Fiona Kavanagh a gorgeously over-the-top Mrs Crummles and Natalie Stringer a superbly petulant Fanny Squeers. I suppose it is too much to hope that we shall have the rest of Nicholas Nickleby from YAT - please!