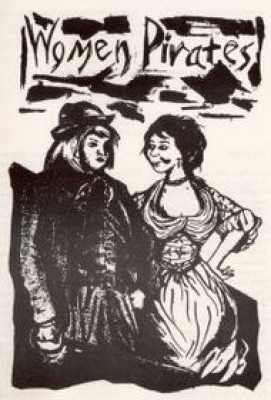 Most of the characters and incidents depicted in this play are based on historical fact. Most buccaneers in the early 18th century, operated under a set of rules known as the Pirates' Charter, which they signed. One of the clauses stated that "no boy or women, is to be allowed on board", the penalty being death.

Ann Bonney, daughter of an Irish lawyer, who spent her childhood in Charleston, South Carolina, eloped with a smuggler, James Bonney. She soon tired of him and fell in love with a pirate "Calico" Jack Rackham, she turned her attention to the new,young, crewman, Mark Read, only to discover another women.

Mary Read's story also forms part of the play together with how the girls served on the same ship and were eventually brought to trial with Rackham and his fellow pirates. Although all the pirates were hung, Mary and Ann avoided the gallows; Mary died very soon after, in prison, of a fever whilst Ann lived on quietly for many years.The Women Pirates
by Steve Gooch
Music by Guy Wolfenden

The RSC received its loudest-ever boos for the Aldwych production of The Women Pirates by Steve Gooch. The normally kind FT critic dubbed it "atrocious rubbish" and, on the first night as a ship's cannon was turned towards the audience, someone in the stalls shouted "We give up".

Not surprisingly the show isn't menionted in the company's official history, but six years later I am happy to record that the Youth Action Theatre production - last week at Hampton Court Theatre - created a buzz of appreciation from the audience and attracted capacity houses.

The secret of the success of Eric Yardley's enjoyable production was his decision to play the piece as a swash-buckling romp, without the heavy sub-Brechtian sermonising of the original version. Curiously, this made the feminist argument come over more strongly.

The major gain came from the casting of Lesley Hann as Mary Read, with none of the self-indulgent posturing seen at the Aldwych. She gave a vivid performance, straight-backed and heroic in the breeches scenes and forthrightly feminine in the romantic moments with her husband, play by Adam Sands. I shall be surprised if I see better acting on the amateur scene this year.

Her performance set the tone for the whole production, taken at a cracking pace and with precision by an excellent cast. Eleanor Baker's tomboy Ann Bonney was attractively hoydenish and I enjoyed her punk costume and bold style. She was well matched by Rick de Kerckhove as the strong pirate captain in a mature performance. David Gray was first rate as an Army sergeant and in several other brief roles.

Although she spent most of the evening in the chorus, Natalie Stringer was particularly effective as Mary's mother, with a convincing west country accent.

The production used the original, rather tum-ti-tum music by Guy Wolfenden, played by Stephen Nicholson, Gordon Edwards and Graham Osborne (who also doubled as the chief magistrate at the piracy trial towards the end of the play).

The songs were led by Clive Stott and by Rebecca Wheatley - the latter showing a real talent for sung narrative...I'd like to hear her in a programme of music hall ballads.

The excellent set, running the full width of the centre stage, with ministrel gallery doubling as ship's bridge during the sailing scenes, was designed and constructed by Graham Osborne in one further example of his many talents.