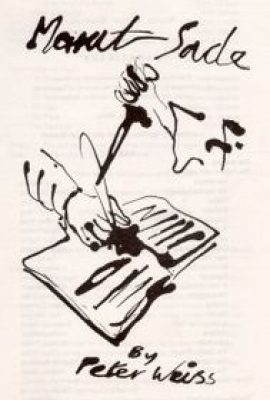 Peter Brook who directed this play for the Royal Shakespeare Company in 1964 with such success, wrote in his introduction to the published play - "A play in performance, is a series of impressionsl little dabs, one after another, fragments of information or feeling in a sequence which stir the audience's perceptions. A good play sends many such messages, often several at a time, often crowding, jostling, overlapping one another. The intelligence, the feelings, the memory, the imagination are all stirred." Such a play is "Marat" - Weiss uses total theatre - using all elements of the stage to serve the play - "Everything is put in its place by its neighbour - the serious by the comic, the noble by the popular, the literary by the crude, the intellectual by the physical, the violence illuminated by the cool flow of thought." And many of the issues raised are so relevant today.

Why write a play about a leader of the French Revolution and his murder and set it in a mental asylum fifteen years after the event took place, you may ask? Sade's encounter with Marat, which is the subject of this play, is entirely imaginary, they did not meet, although Sade did speak his funeral address. But Weiss was interested in the highly individual minds of these two protagonists. He was concerned, as they were, with man's human dilemma "how best to create a more just society; how best to attain a more fair division of wordly goods" and with this, he counter poses - "Can anything justify the act of violence and the suffering it precipitates." And so he chose the time of one of the most violent acts - the oppressed attempted to try and redress the balance - The French Revolution of 1790 and the years that followed.

It is an historical fact that the notorious Sade spent years in Charenton Asylum and was there in 1808 the day in which the play is set. It is also a fact that he was allowed to direct the Patients in dramatic performances as therapeutic treatment. So Weiss creates a situation in which these two highly individual minds can exchange a dialectic on these matters, using in Marat's case, words which he actually used in his writings and speeches. Weiss raises many questions but he leaves us, the observer, to provide the conclusions.Marat/Sade
by Peter Weiss
Translation by Geoffrey Skelton and Adrian Mitchell

When Peter Brook was directing his famous version of Peter Weiss's Marat-Sade, a powerful drama set in the bath house of the Charenton asylum in 1808, he became alarmed at the effect of feigning madness on his performers.

That the same thought struck me several times during Eric Yardley's production for Youth Action Theatre shows how totally this brilliant and disciplined young company had lost themselves in their performances. On the strength of his vivid presentation of the play at Hampton Court Theatre last week, Mr Yardley was right to accept what he must have felt was a great responsibility.

In this production the commedia dell'arte trio had grown to four, de Sade was whipped by Charlotte Corday not with her hair but with a tawse, and there was no onstage blood letting or nudity. In other respects the play had all the hysteria, tragedy and violence of the original - providing the audience with an overwhelming and distrinctly unsettling experience.

Chris Walters was quite outstanding as the Herald, his face a death's head mask, outrageously dressed, his performance totally disciplined and compelling. Nick Wilson looked too healthy and handsome for de Sade in his days of decline, but his muscular delivery made the insanely logical philosophy of the Marquis sound like a real cry for freedom instead of the libertinsm it in fact was - an achievement for a young actor.

Marat, the prophet of the totalitarian state, played by David Gray in a hip bath, could have done with a nastier make-up job on his diseased body but was given the proper sense of implacable rightness. Of all the insane on display none was more superbly played than dribbling Simonne acted with touchingly frightful verisimilitude by Kate Noakes, patiently holding her place by the great man's bath side.

Abigail Dooley was the Charenton patient who plays Corday in the play-within-a-play, depicting the murder of Marat. She was very touching as a victim of sleeping sickness, managing to look both supine and politically possessed.

The production was rich in movement and music, the latter provided by a group under the direction of Peter Roberts (vocal) and Clive Stott (instrumental). The song Poor Old Marat was enjoyably performed by I must acknowledge the power and fervour of the nasty We Want a Revolution...Now!