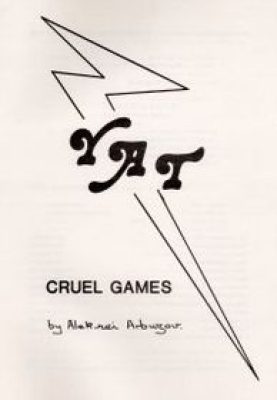 Cruel Games
by Aleksei Arbuzov
Translation by Ariadne Nicolae
The action of the play takes place in a flat in Moscow and in a log cabin in the oil fields in the Tyumen region of West Siberia during the late seventies.

The writer prefixes his play with the following quotation:

"And as he grew.....he walked evenly between us.....a hand out to each of us for what we could offer by way of support, affection, teaching, even love....."


--- Edward Albee from "Who's afraid of Virginia Woolf?"

Some years ago, Youth Action Theatre wrung the hearts of its audience with Alexsei Arbuzov's three-character play The Promise at Craig Hall.

Last week, at the much larger Hampton Court Theatre, we saw the latest Arbuzov piece to reach this country, Cruel Games - which still has as its theme the effect of the arrival of a newcomer on a previously integrated and seemingly stable group.

Unfortunately, the play is far less effective that the earlier one, mainly becuase of the intimacy engendered by the small cast in the former, drew one into the story, whereas in Cruel Games - the intensity is diffused.

Nevertheless, the play does have a certain fascination, and its eleven scenes, divided between a flat in Moscow and a log cabin in Siberia, do create a kind of mosaic so that the interplay of the lives of the characters has some sense.

Director Eric Yardley brought all his customary flair and sensitivity to this play, but he was unable, finally, to convince me that it was a great one.

As the girl Nelly, who is the intruder, or catalyst, however one wishes to view her, Sarah Holm was utterly captivating - vulnerable, yet hard; irritating, yet integrating - she ran the gamut of her own and our emotions with great skill.

I was much impressed by performances from Richard Spice as Kai Leonidov, the first of the three friends to be affected by the girl, and by Andrew Nicholas as his cousin Mishka, a doctor in Siberia, whom she both teaches and learns from.

There were several other neat performances, especially from Carol Palmer as Mishka's wife, Masha, and Chris Walters as Nikita, Nelly's only real love.