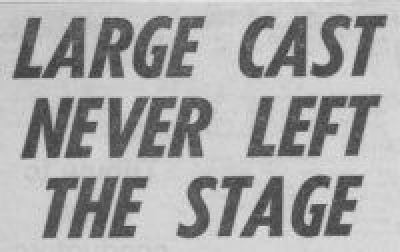 The Rimers of Eldritch
by Lanford Wilson

Youth Action Theatre's presentations are always stimulating, but over the years that I have been reviewing them, none has had a greater impact than last week's production, at Craig Hall, Teddington, of Lanford Wilson's The Rimers of Eldritch.

The strange portrait of a virtually dead town in the Middle West of the United States, uses a collage technique that, in inexperienced hands, could lead to utter confusion for the audience - but Eric Yardley's control fo YAT's young players was so sure and unobtrusively pervasive, that the total effect was clarity itself.

What was even more remarkable was that the cast - and it was a very large one - was on stage for the whole of the play, and scenic changes were achieved with a minimum of lighting effects, but a maximum of dramatic effect, by sheer force of acting ability.

Among the many very fine performances, I must single out the Greek-chorus-style deliveries of Debbie Lane and Antonia Cunningham, whose thread of gossip about the cafe owner, Cora, who has taken a teenage lover, Walter, binds the whole disperate play together. These two were brilliant, and Charlotte Goddard as Cora brought a ring of truth to her part.

The ill-fated calf-love affair between Robert Conklin and Eva Jackson, a crippled girl, played by Guy Taylor and Vickie Smith, had all the seeds of genuine tragedy in it. While David Richmond, as Skelly Manor, the town's misfit hermit, achieved real power in his great monologue in the second act

One more performance demands notice, that of the edlerly, confused Mary Winrod, played with delicate restraint and a quiet puzzlement by Pam Browne.

What a superb piece of work this was - and it was preceded by one of Wilson's virtuosic short pieces - Wandering - in which Alan Ball as He, Sarah Holm as She and Kevin Lewis as Him trace Him's life, through a series of flashbacks in a jumbled time order. The three actors performed it, as demanded by the author, at tremendous pace.