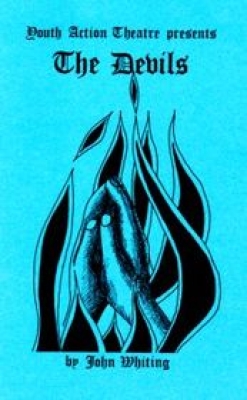 Within the cloister of provincial French nunnery at Loudun, rumour has spoken to Sister Jeanne of the Angels of the libertine priest, Urbain Grandier. A vision of him as spiritual adviser to the order possesses her. When the rejects the offer of the Mother Superior, she accuses him of filling the nun's minds through the power of Satan with filth and lust. For the clerics who are jealous of his brilliance in preaching, for the laity who disapprove of his luxury, and for Richelieu, the 'eminence grise' over all France, who resents his political influence, the hysterical possession of the nuns is a sword against Grandier. Their charge for his trial is diabolism.

The Devils, based upon Aldous Huxley's The Devils of Loudun, was commissioned by the directors of the Stratford-on-Avon company and produced at the Aldwych Theatre, London, this year. It has been acclaimed by critics for possessing a power in its writing that has not been evident in the English theatre since the drama of Webster.

No-one could accuse Eric Yardley and his Youth Action Theatre of taking a soft option with their productions - particularly after the latest offering at Hampton Court Theatre : John Whiting's The Devils.

The biggest problem with this play is to maintain any kind of clarity, in view of the many short, pithy scenes and the large number of characters, most of whom have at least something of interest to impart.

This problem Mr Yardley overcame with comparitive ease for the most part. He had beebn able to persuade all the cast to deliver the text with the clarity and pacing of Gary Jones as the exorcist - extraordinaire, Father Barre, and David Lewsey as the sensualist priest, Grandier, then we should have had an admirable exposition of the play.

However, there is another, and almost as important problem, and that is the matter of understanding. As presented, only a few of the actors (and, seemingly, even fewer of the audience) were able to dig below the surface of the most obvious features of the play.

But the performances of those few were really astounding - and pride of place must go to Julie Finucane as the obsessed Prioress, Sister Jeanne of the Angels. Her use of voice, gesture, and body movement were all part of an integrated whole that brought the poor repressed (in all senses) creature to vivid life.

A production of real achievement and point.