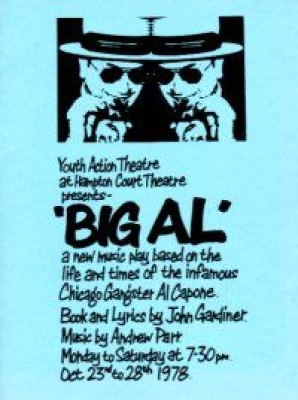 This lively musical, originally written for teenagers and young people, is based on the life and times of Al Capone, the infamous Chicago gangster. Although there are 114 characters appearing in this musical the parts can be divided between a minimum cast of twenty. The set comprises a standing construction of scaffolding which is used to represent different areas in Chicago.

Youth Action Theatre is always full of energy in its productions, but I was unprepared for the sheer force and impact these youngsters brought to the new musical Big Al at Hampton Court Theatre last week.

The play is a life of Al Capone in 20 exhibits, or short scenes, by John Gardiner, with music by Andrew Parr, and this was only the second production that the piece has received - a real "catch" for YAT.

In the title role Kevin Browne was gauche, sinister, captivating and vicious about as many seconds as moods, and surpassed anything that I have seen from him before. But he was almost swept off the stage by a performance from Julie Finucane as Goldie, Capone's mistress.

This was the archetypal American gangster's moll, complete with Brooklyn accent that could be cut with a knife! - a superb performance.

Among the seemingly endless cast there were many performances worthy of note, particularly Debbie Lane's Momma Capone and David Lewsey's Judge.

Stephen Bentley was elegant as John Torrio and delicately camp as Gusik, while Emma Hitching was a moving, if not totally convincing Mae Capone.

Once the accompanying group had moderated its volume so that words could be distinguished, the whole production took on a real sense of power under Eric Yardley's vivid direction. What a night!