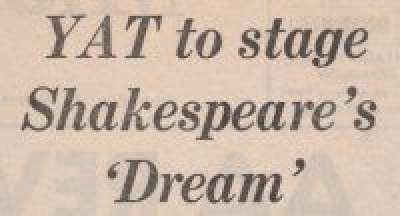 YOUTH ACTION THEATRE has chosen for its seventh full-length production a play by Shakespeare. Now that school holidays have started, rehearsals for 'A Midsummer Night's Dream' are well under way, and it will be presented at Hampton Court Theatre from October 2 to October 5.

YAT is a group of young people between the age of 16 and early 20s who come together because they enjoy, as a group activity, taking part in plays and wish to learn as much as possible about acting. It has been in existence for four years, and the only qualifications required for joining are to be in this age group and to be keen and enthusiastic to learn about drama.

During its short life, the choice of plays has been wide, ranging from a completely improvised play worked out by the group, 'Waiting To Be Born' to such well-known titles as 'The Diary of Ann Frank', 'The Crucible' and most recently 'Spring Awakening' which is at present in the National Theatre's repertory.

Members come from a wide area - Tolworth to Staines, a contingent from Sunbury and another from Ham, whilst most parts of the Borough of Richmond are represented.

Cast in important parts in 'The Dream' are two girls who recently joined, Irene Palka from Surbiton as Hermia and Diana Katis from Ham as Titania. Paddy Hogston from Twickenham who played comparatively small parts previously, now tackles Demetrius whilst Graeme Hole of Richmond, seen as the Rector in 'Spring Awakening' is playing Oberon. One of the most difficult parts in 'The Dream' is Puck which Keith Holmes from Hampton Hill is working very hard to achieve.

When plays are not in rehearsal, the group continues to meet every Monday evening in Teddington when members work on all types of drama techniques, movement, improvisations, mime, etc.

Naturally the ambition of the group is to have a 'home' of its own, the sole use of a large room or series of rooms, where rehearsals can take place on any evening of the week, where those not rehearsing can design or make scenery, properties or costumes or simply to meet and talk over the problems of the production.