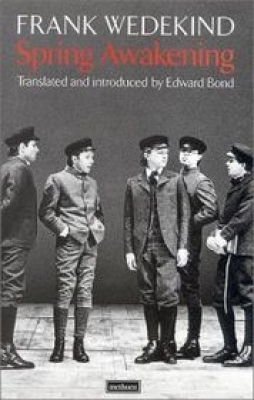 A story of sexual awareness and repression among a group of teenagers.

Growing up has been the subject of so many films and plays in recent years that it was with some apprehension that I approached Youth Action's production of Spring Awakening at Hampton Court Theatre last week.

It soon became obvious that this is no run-of-the-mill effort but a work of some quality, both literary and dramatic.

Taking a group of adolescent boys and girls, he shows how the lack of sex education at home and at school led to dire consequences all too frequently. A girl becomes pregnant and dies, a boy commits suicide, another is sent to a house of correction, yet another turns to homosexuality.

Obviously, it makes a splendid vehicle for youth drama and with Eric Yardley to guide them along, Youth Action handled it with care and compassion. David Lewsey, Stephen Pratt and Keith Holmes, as the young men whose destinies are pretty to adult repression, confirm the promise they showed in "The Crucible" last year. They have all matured noticeably, unless it's just that this time they were playing characters nearer to their own ages.

The portrayal of adults is usually a problem with youth drama, but Eric Yardley overcame it this time by careful casting and the use of face masks (most effective). In fact the staff meeting scene, with masked teachers sitting in formation, casting giant shadows on a white back-drop, was excellently staged and acted (especially Graeme Hole as the Rector).

Sarah Keene and Brian Burgess looked and sounded middle-aged, as Melkior's parents, and Christine Emery conveyed exactly the genteel inhibitions of a mother unable to tell her daughter the facts of life.

Outstanding among the girls were Susan Graves as Ilse, a pretty teaser, and Susan Odell as Wendla, the quiet one who became pregnant.