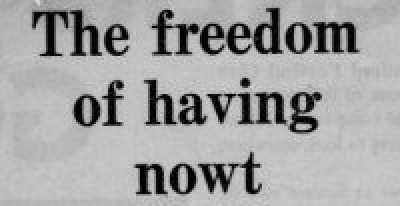 A group of young people gather on a piece of wasteland near to a fairground. They are waiting. They will go to the fair - but later. Their leader, Johnny, has already gone to the fair and without him they are powerless to make decisions. In the meantime they are amused and exasperated by the clown, Toby, a young man who finds strength in not caring. The web of their boredom is penetrated, momentarily, by the eternal dark stranger, a powerful, enigmatic woman whom Johnny has also abandoned. But she offers the waiting group no answers and finally, as Toby has always known, they must make their own decisions.

In 'Johnny so Long', Vivienne C. Welburn has examined, with penetration and great compassion, that period in all adolescent lives when nothing happens and there is nothing to do. Motiveless, directionless, they are thrown upon their own inadequate resources. From this time of standing still, her characters find their own identities and the courage to be independent.

The Youth Action Theatre’s production at St Mary’s Church Hall, Hampton, last Saturday, of Vivienne C Wellburn’s “Johnny So Long” was their fourth, but the first I had seen. I hope I see future ones. Anyone, be her or she adult or youth, who cannot be inspired by Eric Yardley’s dedication as a director had better give up all attempts at acting. The group of six players in this piece were all brimming over with enthusiasm and an obvious joy in playing the roles assigned to them.

The play is set in “a patch of rubble waste ground” and has no story as such. And as in “Waiting for Godot” or “George and Margaret”, the Johnny of the title doesn’t appear. But while the six characters, three of “each,” are using their claws on each other one moment and passionately embracing the next, or variously larking around (there is much good writing in the script), I could clearly see a moral in it all. The six young people who possessed nothing but what they stood up in, were enjoying absolutely perfect freedom. There was not even a policeman telling them to move on. All of which proves that possessions curtail liberty (I am forgetting that two of the girls changed their dress, obviously having a base, or home, enabling them to do so. A theatrical ploy, I guess).

Steve Pratt as Toby, a clown, Keith Holmes as Rusk, a young man, Sally Cadle as Lola, a country girl, Jenny Goode as Judy, Rusk’s woman, Dave Lewsey as stone, deputy leader, and Laura Pratt as Bark, Johnny’s woman, all performed with power and considerable agility. Patrick Hogston, on the accordion, played “Johnny has gone to the Fair”, a suitable choice.