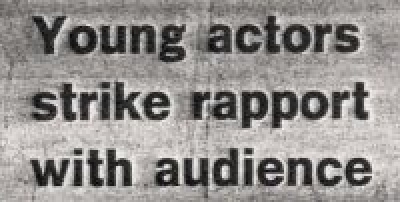 The time came when workshops were no longer sufficient and all wanted to get involved in a play. Being so soon after the sixties, the decade of protest, the consensus was to be progressive and improvise the play and include all the great issues of those times. A skeleton story was outlined - young girl from a strict, narrow background, is made pregnant by her boyfriend. Fearful of confronting her parents and believing her boyfriend would not support her in her need, she runs away. The setting is mid-European and her journey takes her across frontiers. She is wrong about the boy who follows after her. The play episodic in structure, outlines the adventures of these two, through border posts, student camps, on a river barge, in a cornfield, outside a factory on strike and so on. A charming song was written for the play which gave it its title 'Waiting To Be Born' and was sung by Jenny Goode, playing the young mother-to-be.

The rest of the group appeared in various roles, they included Stephen Pratt, Paddy Hogston, Kevin Browne, Deborah Brown, Glynn Jones, Anthony Spracke, Norman Gealey, Nikki Kay, Nigel Cutting, Marek Urbanowiecz and many others. Each scene was planned so that it had a beginning and an end but what happened in between was improvised.

When it seemed that it required an audience, TTC was approached and, although the theatre was not operational at the time, the Committee gave permission for 'Waiting To Be Born' to be presented in a centre arena with the building scaffolding which still remained, surrounding it.

So YAT performed for the first time in Hampton Court Theatre and sitting upon the balcony in the Angel alcove, were two local lads of the period, jeans and bowler hats, who were to play a considerable part in YAT's development over the years that followed, David Lewsey and Keith Holmes. Very impressed by the performance, they approached the director before they left to enquire as to whether they might join.

One of the most elusive accomplishments for an amateur theatre group is to gain complete rapport between the players and the audience. And during its first-ever production last weekend, Teddington's Youth Action Theatre managed the feat with apparent ease. They achieved this in 'Waiting To Be Born' at the Hampton Court Theatre. Their experiment in drama was two hours of improvisation, unscripted but as well rehearsed as any improvised drama can be.

The group re-formed in July under the direction of Eric Yardley with a collection of 17 to 19 year olds, none of whom had had any real acting experience. Their production, something of a progress report on the group as a whole, also turned out to be a tribute to Mr Yardley's skill as a producer.

It is doubtful whether the young actors could have chosen a better theme than student rebellion in the home and in society to tackle at their first attempt. Acting in the round is something that even the most experienced professional actors shy away from. The Youth Action Theatre tackled it first time off and I must admit I got the impression that they had not really practised much, as they tended to act towards one wall far more than the other three.

The main plot of students rebelling against the capitalist employers was all but lost in the human drama of the central character, a girl pregnant and away from home. And it was not until the closing sequences that the two stories gave any real impression of being interwoven. But by then it was too late. For in those closing minutes the heroine - reunited with her lover - was shot in a student demonstration.

A highlight of the whole was the clever linking of sequences by song. The two musicians composed the works and music to a number of very pleasing songs. But my lasting impression of this play that radiated the vigour and enthusiasm of youth was the nightmare interlude. In this, every aspect of the complicated plot came together in a fantastic collage of mime. For this the play was well worth the viewing. Both the audience and the actors had to work very hard to make the rapport happen, but the real test for this group as actors will come when they learn their first script and find an identity in characters outside their own. I look forward to their next production with interest.