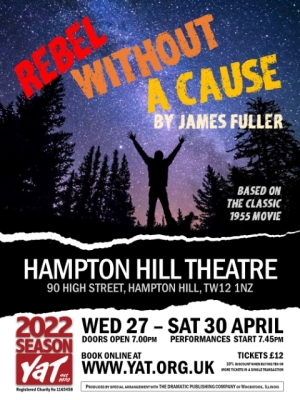 After moving to a new town, troublemaking Jim is supposed to be making a clean start, but being the new kid in town brings its problems.  He forms a bond with a disturbed classmate, Plato and falls for local girl Judy, but Judy is the girlfriend of gang leader, Buzz and when he violently confronts Jim and challenges him to a drag race, Jim's real troubles begin.

Rebel Without a Cause
by James Fuller

Thoughts running through my head as I entered the Hampton Hill Theatre auditorium to watch Rebel Without A Cause was how a theatre production of the play would stand up to the iconic film of the same title shown in the 1950s, a film I still remember with much affection.  Any concerns I had soon disappeared as I sat to watch events unfold just metres away from where I was sitting.  The atmosphere of the theatre, combined with the minimal set, dimmed lighting and large screen projections, all created an enthralling and tense theatre experience.

My only slight quibble was the opening scene, where a man is set upon by members of the gang, failed to make an impact.  This was due to a lack of vocal projection, a difficulty experienced by just a few of the actors.  Fortunately, the rest of the play moved along with tremendous energy and pace and with some outstanding performances by actors.

Essentially the play tells the story of Jim Stark, a lonely, conflicted character who comes from a good home and wants for nothing except the advice and understanding he craves for from his parents.  His mother is domineering, and his father is incapable of answering questions and making decisions.  New to the district and to the school, he finds difficulty making sense of everything.  Trouble comes to him in a big way.  In a period of just twenty-four hours he discovers violence, true love and calamity.  Daniel Siner playing Ray does so brilliantly, taking the audience on a journey with him.  Initially he comes across as a warm, friendly person, but this changes when he meets brutality from gang members, death, friendship and love.  Daniel is one of those actors who is able to connect with the audience, compelling them to share his experience.  This linked to his very good vocal skills makes this performance one to be proud of.

Another great performance was given by Ed Couchman-Boor who plays Plato, an interesting and psychologically troubled character who is responsible for shooting a litter of puppies when he discovers them feeding from their mother.  Despite the horrific nature of this crime the audience cannot but help feel a wave of sympathy for him.  He is bullied and only feels safe if he is carrying a gun.  Couchman-Boor truly owns this character, has excellent physical and vocal projection and reveals a wide range of emotions.

Oliver Keaton, who plays Buzz, does so with great creditability, an aggressive young man with a reckless need to prove himself as the strongest man in the world.  He is a bully, has a cavalier attitude towards women and is both liked and feared.  This urge to prove himself leads to tragic consequences.   Keaton successfully depicts all these characteristics.

Juliet Hill, who plays Judy, brilliantly captures the pain and tenderness of youth.  Her scenes with both Jim and Buzz are very believable, especially her scenes with Jim that take place in the old mansion house.  This is a young actress with a great stage presence, and she has the ability to make the audience feel what she is feeling.

The actor, Daniel Burley, who plays Ray, the Juvenile Officer, is a frustrating actor.  He brilliantly captured the essence of the character … sympathetic, a good listener, wonderful body language, but he keeps his voice low-key.  Often it was not possible to hear his words.  The power of projection he used when speaking through the megaphone was what was required.  Ray is a thoughtful character, but this doesn’t mean a drop in vocal projection – think of the deaf man or woman sitting in the back row of the auditorium.  I did, however, very much enjoy this young actor’s overall performance and in particularly appreciated his business with the hat.

A great deal of thought had been given to costumes, typically those worn in the 1950s.  They were a great help to actors playing two parts, e.g. Grace Ellen who played Mrs Stark and then Miss Hannington, the latter role played with great authority.  Such was the success of the doubling up of roles, I was never confused as to identity of characters.

The actual staging of this production, including simplicity of set, lighting, screen projections, sound effects and music were superb.  There were four scenes that I found particularly memorising: the scene inside the planetarium where tension and drama unfurls against a screen projection of stars and planets; the race scene – this worked so well with spectators collaborating together as a group and responding to the highs and lows of the race, building up to the moment when the car goes over the cliff; inside the large mansion house with the gang circling Plato, like animals advancing on its prey before the kill; and again just outside the mansion house and the tension-making scene between Plato and Jim.  All these scenes as others in this production were brilliantly directed.  Without doubt the two co-directors, Rick de Kerckhove and Rowan D’Albert had a firm grip on this production.

The music, typically set the time period of the 1950s was suggested by such tunes as Two Sleepy People and Seven Little Girls.  Despite the 50’s setting, the play didn’t feel outdated.  The actors and audience were very much in the moment carried along by the strength of the production.

I can imagine Eric Yardley resting out there somewhere in the ether smiling approvingly at the continuation and success of his Youth Drama Group that he formed some fifty years ago.  Well done to all YAT acting members and supporting team of people who continue to make this group the success it is.  I look forward in anticipation to watching YAT’s next one, which I understand is Clue, described as a Spoof Thriller.  In the meantime don’t miss seeing Rebel Without a Cause.