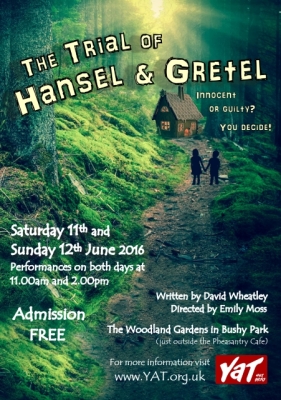 The Trial of Hansel & Gretel
by David Wheatley

The Trial of Hansel & Gretel takes place in a magical woodland courtroom as the two troublesome children stand accused of laziness, mischief and property damage.

A Prosecution and Defence team made up of some familiar fairytale characters will argue their cases to the audience of jurors as various sprites, pixies and woodland spirits re-enact the disputed events. Are they the innocent, abandoned babes in the wood as we've always believed? Or two lazy, insolent brats who don't mind their parents and think its acceptable to eat an old lady's house?

This is an original take on a traditional yarn with plenty of colourful characters, hilarious moments and lively action to entertain the whole family.