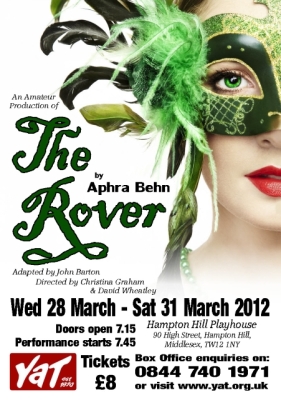 "The Rover" takes place in an unspecified Spanish colony, and opens as a group of cavaliers turn up in time for a carnival. They have been kicking around Europe since their defeat in the Civil war, scratching a living as mercenaries, and are looking for the opportunity to have a bit of fun, get drunk and find some women with loose morals.

At the same time, three sisters of a noble family take the opportunity to sneak out from under their brother's forbidding eye to join the masquerade in disguise to find men of their own, before the eldest is married off to some ancient old Duke, and the youngest is sent off to join a nunnery.

Meanwhile, there are further subplots involving a high-priced courtesan who falls in love and is betrayed by one of the cavaliers and swears vengeance on him, and a friend of the cavaliers - the only one of them with any money- who is duped by a low-priced whore pretending to be noble woman, who robs him and leaves him stripped naked except for a pair of her bloomers.

All you really need to know is that it is a fast paced romp -both funny and touching- featuring intrigue, adventure, masquerade, mistaken identity, witty banter and slapstick humour, whores pretending to be ladies, ladies pretending to be whores, swashbuckling cavaliers, drunkenness, saucy gypsies, a wily thief and a beautiful courtesan, revenge, nymphs, men in bloomers, swordfights, dancing and more swordfights (and a half-brick in a sock). Oh, and true love, there's some of that in there too.

So, all in all, exactly what the Puritans would have hated: a really cracking night out...

The Rover
by Aphra Behn
Adapted by John Barton

The “Restoration” period of English Drama, which basically covers the reign of Charles II, brings us a completely new, sophisticated, mannered, form of Drama, with a noticeable sexual content. The plots of many Restoration Plays are quite similar in that we are presented with an array of licentiousness, intrigue, preservation of (and often subsequent loss of) virtue, mistaken identities, cross-dressing, ridiculous and often farcical situations, but all culminating in “gentleman gets lady” and the Restoration of Order. That last is important, since, at least in 1660, that is what England believed it needed in the form of Monarchy. “The Rover’s” concluding speech actually states this.

These plays only succeed if the Director and the Actors really “let their hair down”, and keep the action moving, without letting us ponder on what is basically rather a thin plot; in this respect, a suspension of disbelief is not only desirable, but vital. Tina Graham’s and David Wheatley’s production succeeded triumphantly in this respect. Beautifully staged, lit and choreographed, with the fight scenes “par excellence”, it was true to its period. The stage had been slightly extended with an apron, and this gave the opportunity for the actors to deliver asides directly to the audience, so important in this type of drama, and again true to period.

The set was pleasingly colourful, and constructed so as to provide ease of movement in the many comings and goings of the cast, as well as groupings on stage: John Barton, as the programme told us, re-set the play from Naples to the Caribbean in his 1985 adaptation for reasons he never, to the best of my knowledge, disclosed. I am easy either way, but I did note an Italianate back-drop in the West Indies. Best of both worlds perhaps?

The presence of a superb guitarist in the form of Joe Olney, who also composed the music used, was an added bonus to the proceedings. He propelled us right through the play: the opening dance was neatly presented, with the players coming on two by two before the dance proper began. I also noted, with great pleasure, the slick scene changes, cast bringing on and taking off furniture items, plus fast entrances/exits, which kept the momentum up: particularly noticeable was the farcical “Chase-about” in the 2nd half, where the well-drilled cast showed breathtaking dexterity.

So, let’s turn to the actual performances: I’ll preface this by saying that, in most Restoration Plays, the ladies get the cream parts: I am sure we all know that the period saw the first appearance of females on the English Stage, so it is understandable that Dramatists were able to give full rein to their newly-found licence. When we see that Aphra Behn was England’s first professional female playwright, we can expect a particular female richness, and we were not disappointed in this production. Foremost amongst the ladies was Dana Marshall as Hellena: perfectly spoken, delicately moved (how beautifully she used her eyes), she had an unmistakeable sense of fun and, even more important, was totally in the period. Close behind her was Becky Lewis as Valeria, a less interesting part, but there are no small actors…. These two complemented each other perfectly and were a constant delight. The third member of the sisterly trio was Karin Carlson as Florinda: equally poised and capable, but less articulate: her diction and delivery was not always clear and structured – more of that anon.

Despite the basic triviality of Restoration Plays in general, there are more serious characters, who make us look a little deeper, and for this to be achieved, we need an actress able to convey a more profound emotion. In this play, the character is the Courtesan Angelica and in Stephanie Mott there is no doubt that we had someone who has considerable stage presence, and who was in complete control throughout, progressing from vanity to disillusionment. This was a finely spoken and carefully realised performance. I eagerly await her Lady Macbeth!

The gentlemen have a more difficult task and here is an area where I have some reservations. However, none apply to Tom Wright, who gave the performance of his career as Blunt. The part is a gift for a strong actor with real comic timing, and Tom took it with both hands and presented us with an Ace of Trumps.

The Rover himself is a very difficult part, since we shouldn’t really like him, we shouldn’t feel he is worthy of any lady: in short he is a bounder of the first order. And yet…and yet – this is the very type of person British Audiences can’t resist. The reason? Well, you will have your own ideas, but to my mind, he must have a roguish charm, and a light, whimsical comic touch to basically “con” us and endear us to him, in spite of ourselves. I missed this in Jason Evans’ performance, capable as it was (the drunk scene was excellent). His two compatriots, Bellville (Jack Tidball) and Frederick (Matt Penson) are rather colourless parts. Both actors did what they could, but were not able to clothe their roles in real flesh and blood: however, they did not let the side down and I feel with more experience, they will grow in stature in future productions.

Space limits mentioning everyone, but the two Bravos (Anjum Dosaj-Halai and Joseph Evans) deserve a mention: their double-act worked very well, especially when they were onlookers at the back doing just enough without detracting from the basic action. Then Sophie Humphries as Lucetta gave a fine tongue-in-cheek performance of a Prostitute to the detriment of Blunt. Last, but by no means least, was Caroline Gudge’s mind-blowing Ribbon Dance.

The costumes in general were pleasing, even if the period drifted a little in some cases. I did, however, worry about the majority of the male hair-styles: Tom Wright had grown his hair and as a result looked very 1650-ish, but most of the others could not help but look too 21st Century: I know this is a difficult area, and wigs are expensive: perhaps headwear might have helped?

My final reservation is (sadly) on diction: too many of the cast lost the ends of their sentences allowing their voices to drift downwards at the close of their speeches, and the letters ‘D’ and ‘T’ were sometimes noticeable by their absence. It is a lazy way of speaking which may fit Eastenders, but certainly does not fit a play of this nature where sentences must be constructed and articulated: listen to Mr. Wright and Miss Mott and you will see what you should be achieving.

But let me end on a positive note: this was a play I did not know, but I enjoyed it immensely, and was full of admiration for the verve, zest and sheer enthusiasm of its large cast. I applaud YAT – and of course Tina & David – for their courage in bringing an era of English Drama, seldom presented, but well worthy of revival, to our Audiences.