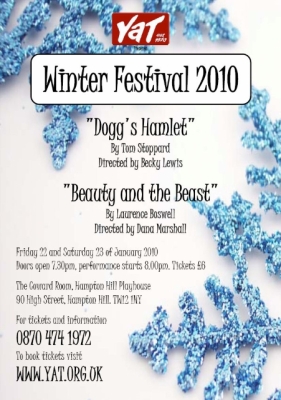 The Winter Festival is an opportunity for aspiring directors to direct their peers and to showcase their talents.

A troupe of English schoolboys (played by adults) speak in a mock language called "Dogg." This hilarious language babbles along until the schoolboys, who are studying Shakespeare's "foreign" language, present an incredibly funny 15 minute version of Hamlet and then encore with a two-minute version.

Beauty and the Beast
by Laurence Boswell

This theatrically thrilling new version of the classic myth was first produced for the Young Vic in 1996. Rather than presenting kids with gaudy, gobsmacking spectacle, this enchanting Beauty and the Beast stimulates the mind. Laurence Boswell's adaptation of the fairy story is at once beguiling and disconcertingly strange. . . his beautifully written script is so evocative that we seem to see wonders that are not actually there . . . It is hard to imagine a more hauntingly beautiful children's show Daily Telegraph. This enchanting play can be performed straight or with music - drawn from traditional French folk melodies - composed by Mick Sands for the Young Vic production. the score is available separately from the text.

BEAUTY AND THE BEAST