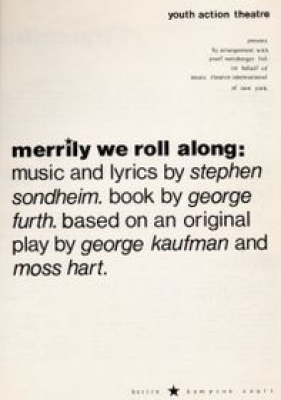 Merrily We Roll Along
by Stephen Sondheim
Book by George Firth. Based on the original play by George Kaufman and Moss Hart
Merrily We Roll Along tells the story of the rise of Franklin Shepard. The show starts off with Frank as a successful filmmaker and works backward in his life. We learn that Frank used to be an idealistic artist who dumps his best friends and lowers his artistic standards all in order to become popular in Hollywood.

Review by John Thaxter for Richmond and Twickenham Times (September 1987)

With their director Eric Yardley temporarily out of the running this summer, two young members of Youth Action Theatre took over the company's lively production of Merrily We Roll Along, Sondheim's musical about lost dreams.

And in collaboration with musical director Peter Roberts, a Sondheim afficionado and inspirational musician, they first took the show with its thirty performers and simple props on a visit to Berlin.

Andrew Wale's production with his co-director and choreographer Eleanor Baker, radiating raw and sometimes raucous energy, is now to be seen at Hampton Court Theatre. The final performance is tomorrow evening. And if it isn't quite what Sondheim had in mind it certainly goes with a bang.

The story is told in reverse, starting with a bunch of sadly corrupt forty year olds, taking them back over a quarter of a century to a 1955 graduation day and youthful optimism, plangent chords gradually giving way to happier musical sounds.

Duncan Jones in the leading role of a Broadway composer, must also be the first actor to play piano on stage in character, accompanying Joseph Early as best friend and lyricist in an attractive rendering of Good Thing Going. And they have several well-paced scenes together althought, early in the run, performance nerves may have robbed us of the necessary comedy of this stage partnership.

But the musical treat of the evening comes from Rebecca Wheatley getting her first crack at the haunting Old Friends - Sondheim at his most lyrical - revealing a fine voice that has surely benefited from professional training. And with a new-found stage presence, putting this young lady in the front rank of local musical performers.

And Bronwen Davies is appealing in the wifely Not a Day Goes By. Elsewhere the piece works best when the large and joyful company swirls into the big numbers or achieves the occasional pianisimo ensemble effect. But the mood is a million miles from the intended sophistication of Broadway and the showbiz set.

Andrew Wale providing his own slick stage designs, with the help of Irene Palko's costumes, has once again opted for stark black and white. But this is Broadway schmaltz not cabaret (or even 'Cabaret'), and colour would have added a welcome third dimension.