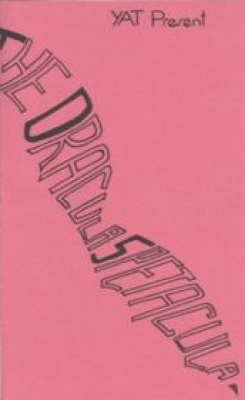 If you are looking for a simple, effective and funny play for a drama group or school then look no further than "Dracula Spectacula". The humour is often slapstick, usually groan-worthy, but always accessible.

This play has something for everyone. The musical sections are effective but can easily be omitted if no-one has a talent for singing or time is short.

The main characters are Nadia Nieve and Dracula himself but there are a lot of minor characters involved in the plot, making it ideal to perform with a large drama group.

Dracula in drag? What is the world coming too? Is nothing sacred? They'll be playing Charley's Aunt straight soon. For all I care they can - "they" being YAT (Youth Action Theatre) whose send-up musical, The Dracula Spectacular, wowed 'em last week at the good old Hampton Court Theatre. Hardly surprising it was a sell-out.

In fact one could, with reason - though reason has but little to do with this show - call it a Super-Drac, and not understate the case.

My seat was on a side-aisle and when, after lights-down, I sensed myself surrounded by "human" beings, I concluded they were the usual latecomers. How wrong I was - they were zombies from outer space, the show was on!

With book and lyrics by John Gardiner and music by Andrew Parr, this "spooky musical" tells of a young American school teacher, Nadia Niave and her party, who are grounded on a flight from Pennsylvania, landing in Transylvania - and you can guess what happens there!

Seldom if ever, have I enjoyed a youth show - or any other kind of show for that metter - more. Full of good numbers - Fly Pennsylvania Airways; It's Nice; Intravenous Genuis; Just The Way I Am, to name a few - and bubbling over with get-up-and-go. I, personally, laughed until my sides ached, and rare thing for me in any theatre, amateur or professional.

Chock-ful of necrophilic gags - "I'm only here for the bier" is, I think a fair example - it boasted a most attractive and talented young cast, so much so that it would be invidious to single out individuals.

However, for the benefit of fond parents I must mention the delightful, not to say delectable Annabel Giles as Nadia; the superb Elvis-like Dracula of Stephen Bentley; the moronically-funny henchman, Genghis, of Keven Carroll; the demoniacly-diminutive Wraith (Drac's mum) of Irene Polka (some mothers do 'ave 'em!); Drau Gretel, the innkeeper's wife (Emma Hitching); the effectively comic Pilot (Keith Holmes) and monosyllabic student Elvis of Gary Jones, a young man who proves that a part's effectiveness does not always depend on the number of words it contains.

For the rest I adore Booze of the Glublick Addicts (Debbie Lane), the Pretty Singers (Karen Grimmett, Alison Tutton and Maria Lamb) - in fact, almost everyone in sight.

Oh, I almost forgot, Jon Scarrott was Master of the Revels (the shows' director). Unfortunately the rather overcrowded programme - more than 35 taking part - omitted to mention who was responsible for the fantastic make-up jobs or the costumes. A pity.

Criticisms? Apart from the usual occasional physical untidyness and indiscipline, unseparable from all youth shows - more than compensated by enthusuasm and energy - the only one I can think of is that fairly late in the first half, for a brief period I felt the whole thing was getting just a little bogged down and momentarily not going anywhere.

That of course, was the fault of the writers not the performers. In short, as you have guessed, I liked it.