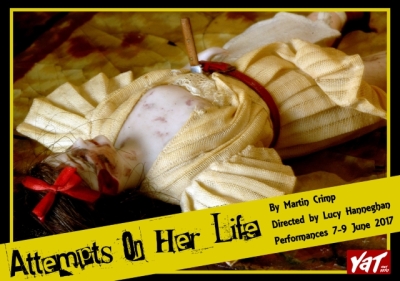 Martin Crimp's 17 scenarios for the theatre, shocking and hilarious by turn, are a rollercoaster of late twentieth-century obsessions. From pornography and ethnic violence, to terrorism and unprotected sex, its strange array of nameless characters attempt to invent the perfect story to encapsulate our time.

Attempts on Her Life
by Martin Crimp

I never fail to be impressed by YAT’s choice of material and from where I’m sitting, this is their most challenging, daring and confrontational production yet.  In her production notes young director Lucy Hanneghan describes the play as theatrical “Marmite”, “you may love it, you may hate it, but either way you’ll definitely want to talk about it”.  So which camp do I fall into?  She was right in that there is certainly a lot to talk about and it is undoubtedly a strong and impassioned production, but a “love” or “hate” response is not so easily settled upon.

Martin Crimp’s play debuted at The Royal Court in 1997, to a mixed reaction.  “Is it even a play?” was a question readily up for debate among the critics, by both those who loved it and those on the other side of the Marmite debate.  Attempts on Her Life has no cast list, no stage directions, and conventional “acts” and “scenes” are substituted with seventeen short “scenarios”, each with their own titles.  Well, sixteen titled and one “Untitled”, to be exact, although you could reasonably argue that “Untitled” is a conscious title in itself.

The elusiveness of a title, of defining what is and is not there is the central theme that forms the invisible spine of the scenarios.  Crimp presents us with graphic imagery: genocide, violence, suicide, pornography, terrorism – the short warning on the back of the programme of “adult themes and content” is rather an understatement – but invites us to question, what are we really seeing?  What is outside our field of view?  What is shown and what is hidden from us?  The end of the twentieth century saw the eye of the media being scrutinised in a new way, and twenty years on in this age of “fake news” and the news feed “bubble”, a piece of theatre questioning its bias – whether you call it a play or not – couldn’t be more pertinent.

With no cast list, the play’s lines are free to be divided as the director sees fit among as many actors as they choose to cast, unrestricted by age or gender; a “director’s dream” Hanneghan calls it in her notes.  In the wrong hands, its lack of prescription could easily turn it into a directionless mess, a director’s nightmare.

Hanneghan however proves herself more than capable of handling this challenging and mature text.  As YAT are justifiably renowned for, the pace and energy never drop.  Set is minimal, a few pieces of furniture wrapped in crime scene tape, with physical theatre and quick costume changes to convey the revolving door of scene changes.  Each change is slick, everyone where they need to be when they need to be there, and the resulting pace is relentless.

Hannagan’s ensemble cast of twelve are well balanced throughout the eighty-minute piece, and each given their moment to show us what they’re made of.  Each actor is faced with the challenge of multi-roling, and every one of them handles it with aplomb.

There is one central character in this characterless play, the “her” to which the title refers, but she remains elusive, described from the outside but never pinned down, which Hannegan reflects in her casting decisions.  In one scene she is a lover, played with doe-like eyes by Emily Coates, in another a terrorist, played with devil-may-care attitude by Lena Kheroua, in yet another she is a car…  “The sun gleams on the aerodynamic body.  The aerodynamic body of the new Anny…  now available in diesel”.  Even the spelling and pronunciation of her name is not fixed (Anne, Annie, Anny, Anushka) and what is “attempted”, by her “on her life” or by Crimp in the context of this play is similarly never clearly defined.  Hanneghan isn’t giving any hints either, “I’m not going to explain my interpretation…  I’d like the audience to question what they are watching”, she revealed tantalisingly on the YAT Twitter feed, prior to the opening of the show, quite rightly leaving it ripe for audience conjecture.  Was Annie a real character at all, or just a product of our – or the media’s – conjecture?

The cast of YAT proved in their performances that even without defined characters they could deliver memorable performances.  Gracie Moss’s emotional performance was captivating, delivered with cries of fury and tears of rage, whilst another expressive actor was able to draws roars of laughter from the audience with nothing but a suggestive flick of the eyebrows and a balloon pump.  Timmy King’s impressive accent work had him hailing convincingly from at least three different regions, whilst Freddie Haberfellner and Vilde Valerie performed with guts and gusto almost entirely in alternative languages, one of Crimp’s few production notes with Hanneghan was able to utilise to its full disorientating effect.

As if the continuous scene changes and role-swapping weren’t enough bedazzlement, scenes are punctuated by exemplary technicals.  Deliberately over-stimulating video inserts form an appropriately arresting introduction.  Well considered sound design is also used to heighten the head-spinning effect of the piece, with voice-overs, voicemail messages, pumping music and even a full-on musical number contributing to the chaotic sequence of events.

The intimacy of the Coward Studio at HHT suited the material and this technical articulation of it.  In a space this intimate, the sound can envelope you, the video and visuals are “In-Yer-Face” – as the programme promises – there is nowhere to hide.  At times this could be (although I respect that this was almost certainly deliberate) a little too over-stimulating and intense.  A little more audience care would have been appropriate, given the inflammatory and potentially trigger-inducing nature of the material.

Although there are some outrageously funny moments, overall Attempts…  makes for uncomfortable, even unpleasant viewing.  I wonder at how many of those squirming in their seats around me were aware of what they were letting themselves in for!  Why do we, whether by choice or unintentionally, go and sit through performances that make our toes curl?  Performances that play out the ugliness of the world, that hold up the worst in our world for us to see in full and uncensored detail?  Performances that get up in our faces, and point their metaphorical fingers directly at us?

Because, we think.  And thinking leads to…  well, that’s precisely the point.  Who knows where?  New thoughts, new ideas.  By not pinning down the subject matter, Crimp has not limited the interpretive possibilities.  This is what makes it such a gift to creative young directors like Hanneghan, who can shape the material any which way they see fit to speak to audiences now.  She has excelled at making a production that is current, without being gimmicky.

So to return to the question of Marmite, of love or hate and the desire to talk about it.  I love the daring of this production, because it exposes, my hate of the ugly truths I see within it, the unspoken truths that we as a society, twenty years on from the original, are still subject to.  So in truth, I feel both love and hate in response.  The interpretive possibilities however ascertain that no two audience members will see eye to eye, making this production something we don’t just want to but need to talk about.

Since its Royal Court premiere in March 1997, Martin Crimp’s “Attempts on her life” has been translated into over twenty languages and The National Theatre presented a major UK revival in March 2007.

YAT’s production (7th-9th June 2017), expertly directed by Lucy Hanneghan, seems timely as many of the themes resonate boldly in our current, unsettled times: like Crimp’s work the world seems to be bombarding us with information and images at rocket speed and we cannot make sense of all of it/them.

“Attempts…” does not have a traditional linear narrative but presents the audience with “17 scenarios for the theatre” sometimes connected by a female “character” called Annie/Anne who we first meet as a corpse lying dead next to a phone which is playing messages to her (recorded by the cast). This was an intriguing start to the piece as you were left wondering who she was and why she was dead. It is difficult to define the piece as it is more a quick fire series of impressions/expressions of the modern world than a story in the typical sense. But what a wonderfully theatrical and visual series of impressions we were treated to with this production. Lucy is clearly a talented and imaginative director who had a strong, defined vision for this enigmatic and kaleidoscopic piece of writing. It was obvious how much work had gone into crafting this production. I loved the crime scene set design (Alice Metcalf and Joe Evans) which was simple and functional but totally reflective of the themes/tone of the piece. I loved the brilliant slide show of bizarre and quirky images that started the show and the appropriately pumping soundtrack (much of which included dialogue and singing from the cast themselves – the Eurovision satire was hysterical and had us in stiches!). The humour was an important element of this show: I really liked the balance between moments that were political or morally hard hitting and moments that suddenly had the audience laughing out loud.

I can’t single out any performers as there were no character names but I was very impressed with the talent and energy of this ensemble cast. Each actor got the chance to play a major role and threw themselves into this with great panache and enthusiasm.  As well as creating engaging “characters” what most impressed me was the physical theatre aspect of the performance. Movements were slickly synchronised and the choreography was inventive and visually exciting. Spatial awareness in the confines of the compact studio was key to the impact of the ensemble movement work. The cast impressed me and I hope they will consider auditioning for future TTC productions (#shamelessMatchgirlsplug!).

To sum up, this was a really thought-provoking, enjoyable, immersive production courtesy of an intelligent, creative director, a hard-working technical team and a vibrant, skilled cast. Thanks to you all!