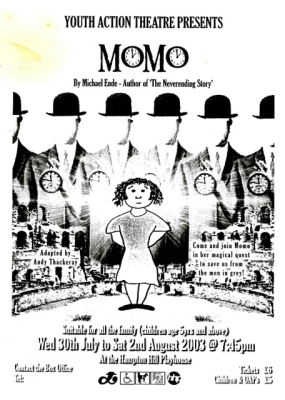 The sinister men in grey have arrived and are slowly taking over the city! Unnoticed and unseen, these shadowy figures are silently stealing time from the unsuspecting citizens. All would be lost if it weren't for a ragged waif-like girl called Momo whose simplicity and honesty holds the key to the city's salvation. But can she stop these soulless, corrupt creatures in time?

MOMO is a fantastical voyage of imagination and adventure based on the best-selling novel by German author Michael Ende. Born in 1929, Ende began life as an actor before turning to writing. His stories have been translated into forty different languages and have sold over twenty million copies worldwide; the best known of which is the 'The Neverending Story'.

Momo is a child with a special gift. She is the only person in the world that can stand the influence of the grey men.

Momo is a truth telling book about life in the modern world, and even if the author uses magic to explain this, it doesn't mean there isn't truth in it. An enchanting read for children and adults alike.