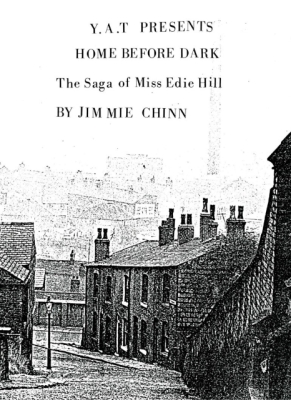 Ideas for plays are begot in odd places. Sitting over a pub lunch with my friend Eric Yardley, he was talking about the difficulties he has in choosing places with twenty or more parts for his YAT shows. I think he said something like, "You couldn't write us a play?", at which point I must have laughed. Maybe to change the subject I said, "I'll think about it", perhaps hoping he wouldn't mention it again and spoil our lunch. We took a stroll in Bushy Park and, even though I pushed them to the back of my mind, ideas and stories began to swim in my head. I came home and tried hard to continue with a particularly stubborn episode of a North-Country soap which I write from time to time - the reason I'd gone out to lunch was to try and get inspiration - what sort of dialogue do you write for two actors and a herd of cows in the middle of a field in February?

A dear friend of mine rang at that moment - had I read her new novel a copy of which she'd kindly sent to me - no I hadn't - I hadn't had time - "I'm up to my ears in a new play", I lied to make her feel better. She hung up. I returned to typewriter knowing I would not finish the telly script that day - I had the dreaded writers' block. I put a clean piece of paper into my machine, typed the title "Home Before Dark" for no other reason than that I liked the sound of it and by eleven o'clock that night I'd written several scenes of the first act. Don't ask me how or why that happens - don't ask any writer why these things happen - they just do! All I can say is that I'm grateful to Eric and to YAT for releasing something which had obviously been simmering away in the dark recesses of my brain waiting to be put down on paper and then brought to life by this exceptionally talented company of young actors.

No, the play is not about me at all - but it is about people I knew and loved all those years ago in Oldham and District...people who although on the surface appeared to have very little were always happy, always laughing - people from whom I learned so much about the simple art of living. I did eventually finish the soap script but as yet I haven't read my friend's novel - perhaps tomorrow.

Review by John Thaxter for Richmond and Twickenham Times (March 1993)

A Lowry-like Lancashire millscape, created by designer Christine Osborne, provides the gloomy backdrop for Home Before Dark - The Saga of Miss Edie Hill at Hampton Court Theatre this week.

Below it an acting area of brick walls and cobbles stands in for a pub, cotton mill, street corner, railway station and various domestic interiors.

But in Jimmie Chinn's 'memory play', specially written for a thirty-strong cast of young adult members of Youth Action Theatre, the northern folk who people these streets are no mere match-stalk men and women.

Under the direction of Eric Yardley and Rick de Kerckhove every character is made flesh and blood with a unique name, personality and relationship to the others. And over the two hours playing time each helps build up a convincing storty of a warm-heatered Lancashire community in the Forties and Fifties.

The central figure is young Edie, a cheerful, hard-working girl with a gammy leg brough on by infantile paralysis, radiantly played by Catherine Early.

She opens the play with an unwedded, unwelcome accouchement. Thenm after a brief step back to her schooldays, we watch her struggle to bring up her illegitimate son Tommy (Nairn McCrudden) who, at the final curtain, prepares to leave for university and a complete break with cotton mill traditions.

There's a lot of popular music from the Thirties and Forties, some on tape, some sung informally by the cast in pub and mill. In fact the play is like the libretto for an embryo mill town musical in search of a composer, especially Peter Gardiner's role as Edie's young brother, a Billy Bigelow figure returning from some viewpoint in the sky to tell us the story in unrhythmic rhyming couplets.

One copuld also begin to sketch out lyric lines for the romantic reunion of mill-girls Sarah Jane Renton and Christine Osborne with their GI Joe sweethearts, played by Damon McCollin-Moore and David Chouvin. And there's a Sally Army band and an industrial dispute to trigger memories of Guys & Dolls and The Pajama Game!

Strong support comes from William Allen as a school bully and Robbie Frater as one of his victims; Joanna Viney as a brusque schoolmarm; Simon Joselyne as the tough mill supervisor and Fiona McMahon as his unhappy bride; Miles Hawkins, the proprietor's son, married to Daisy Hughes as a middle-class lady who coaches the studious young Tommy; Sarah Moulds as domesticated Daft Lizzie; and David Hannigan, a senior member of YAT, as Edie's dad.

The performance of the evening belongs to YAT newcomer Alice Langrish as the powerful Irish Mary, bringing up a family of 13 boys single-handed and attending to the community's entrances and exits: notably the touching scene where she lays out Edie's dad ready for burial while a pub knees-up continues downstage.