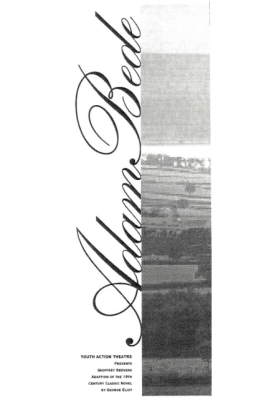 In this rich and often humorous portrayal of 18th century rural life in middle England, Geoffrey Beevers remains true to George Eliot's original novel. Adam Bede, a young carpenter of integrity, loves Hetty Sorrel, a pretty and self-centred dairymaid, who herself dreams of Arthur Donnithorne, the young squire. Arthur cannot resist seducing her, and their passion has tragic consequences for the whole community.

Although on one level 'Adam Bede' is a rich and loving re-creation of a small community shaken to it's core, it is more than a charming, faultlessly evoked pastoral.

Despite a long first act which took a while to get the audience fully involved, by the end of the evening George Eliot's story had taken a firm hold. Set in a rural community about two hundred years ago, the tale is a fairly predictable Victorian melodrama in which the flighty but beautiful Hetty Sorrel is loved by the upright and dependable village carpenter, Adam Bede.

However, the young squire is also enamoured and poor Hetty, dazzled by his social position, and now pregnant, is forced to flee the village to give birth under a hedge. The death of the infant leads to her trial and execution and Adam, in the obligatory happy ending, marries Dinah, an ultra-moral Methodist lay preacher, selflessly given up by his improbably saintly younger brother who had been pursuing her throughout.

The setting, of several planks and boxes rearranged between scenes to suggest carts or benches and to form ramps and different acting levels was simple and effective.

The only problem was the fact that the rearrangement of the various elements between scenes, whilst carries out by the cast with well-drilled efficiency, often took a little too long, losing flow and continuity. If these changes could have been achieved with less disruption to the action, I feel sure that the tale would have taken hold much earlier in the performance than it did.

This was particularly noticeable in two passages where dancing was called for, after which the set was changed, the cast moved to new positions - all very efficiently - and only then did the music start and the dancing begin.

My second caveat about this production, however, is a major one. The use of language. Eliot wrote in typically Victorian prose, somewhat overblown to our modern ears perhaps, but with it's own rhythm and elegance. It was the delivery of this highly descriptive and colourful language that fell short. Younbg people today just don't seem to appreciate the values that should be given to prose like this.

Everything was taken as a similar pace, with similar emphasis, with words elided and diction often poor. This undervalues the text, robs it of the period feel necessary to such a melodramatic piece and makes listening, and therefore meaning, difficult for the audience. 'Anydangin't', I assume was meant to come accross as 'Any danger in it'.

I hope that YAT, which boasts much talent, will address this aspect of their work, particularly when next embarking on a classic or non-modern text. Call me an old-fashioned pedant if you like, but I do miss the pleasure that a relish and understanding of our infinitely expressive language can provide. All too often, even in the professional theatre, it is now seen as suspect to take much care over this.

However, there was much to praise in this production.The discipline and concentration of the whole cast, all of whom were on stage throughout, was most impressive. When not taking part in the action, they sat at the back of the stage, their attention absolute and without any distracting movement. Performances were generally good, and one or two outstanding: my general commendation is offered to the whole cast for what was an outstanding team effort.

Costumes were simple but effective and the lighting, an important element in a production with minimal decor, was excellent throughout.

I thoroughly enjoyed this production, the whole thing put together with great skill, discipline and attention to details and, especially in the second act, reaching a satisfyingly dramatic climax.