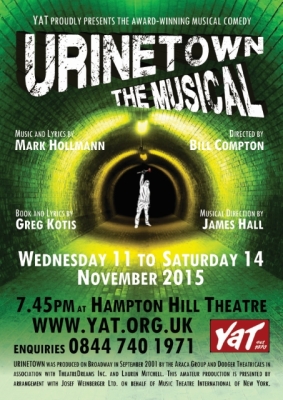 In a Gotham-like city, a terrible water shortage, caused by a 20-year drought, has led to a government-enforced ban on private toilets. The citizens must use public amenities, regulated by a single malevolent company that profits by charging admission for one of humanity’s most basic needs. Amid the people, a hero decides he’s had enough, and plans a revolution to lead them all to freedom!

Inspired by the works of Bertolt Brecht and Kurt Weill, Urinetown is an irreverently humorous satire in which no one is safe from scrutiny. Praised for reinvigorating the very notion of what a musical could be, Urinetown catapults the “comedic romp” into the new millennium with its outrageous perspective, wickedly modern wit, and sustained ability to produce gales of unbridled laughter.

URINETOWN was produced on Broadway in September 2001 by the Araca Group and Dodger Theatricals in association with TheatreDreams Inc. and Lauren Mitchell.

This amateur production is presented by arrangement with Josef Weinberger Ltd. on behalf of Music Theatre International of New York.

There are many musicals with strange subject matter but surely none stranger than the premise of privatised public conveniences in a world where private facilities are illegal. And that is the premise of Urinetown, the Tony award-winning show penned by Greg Kotis and Mark Hollmannn

This is an ambitious show musically and also requires an excellent standard of acting in order to give credibility to the somewhat tongue in cheek 'show within a show' format. YAT have never been anything other than ambitious and here their enthusiasm, obvious hard work and sheer talent all worked together to create a truly entertaining performance.

This is such an ensemble piece that it is difficult to mention specific performances and the entire company made the stark difference between the 'rich' and the 'poor' very realistic and there were some lovely costume touches that added to the timeless  and placeless feel of the piece; I am thinking specifically of the policemen's (Oliver Horsfall and Joe Evans) uniforms, reminiscent of 1930s Germany, Mrs McQueen's (Rebecca Tarry) power suit that was very Victoria Beckham and the Bader-Meinhof look sported by the revolutionary Becky Two Shoes (JoJo Leppink). The overall costume, set and lighting design in fact underlined the theme that if we do not learn from the mistakes of the past we are doomed to repeat them.  On the night I saw the show (the Saturday after the Paris atrocities) this was a particularly poignant message. And as an aside, the minute's silence before the show started was a lovely touch - thank you for doing that, guys.

The ensemble work in this production was really strong and Aimee Bevan's choreography highly effective and well executed. Likewise the singing was of a very high standard. I am usually hyper-critical in this area but even I was impressed by the quality of the choral/harmony work and our hero and heroine, Bobby Strong (Toby Davies) and Hope (Matilda McCarthy) are both strong singers who really shone. It is always difficult to single out individuals in a production which has so many strong performances but I have to mention Oliver Horsfall (Officer Lockstock) and Jess Hunt (Little Sally) who must surely win an award for the strangest double act ever! Their narration was a study in storytelling and a real highlight of the evening.

Was there anything I didn't like? Well, I felt that some of that lovely harmony work was lost in the staging - it was not always possible to see who was singing and some solo lines were lost as the singers were masked. And this piece, although set nowhere in particular, is very obviously written by Americans and in the American vernacular. A lot of the dialogue (for me) did not work as well when delivered in English accents.

These are small issues though in the great scheme of things. Overall this was one of the strongest YAT shows that I have seen. So, many congratulations to director Bill Compton and James Hall, MD, for producing such a quality piece of theatre. Stay ambitious, YAT - there seems to be nothing you can't do!