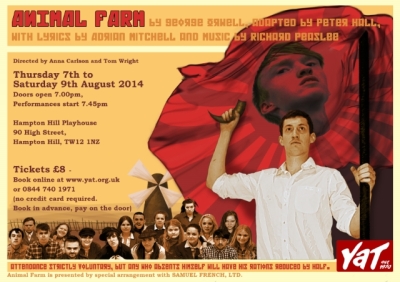 George Orwell's Animal Farm is a perennial favourite, and this summer Youth Action Theatre returns to HHP with their take on the tale.

On Manor Farm, the animals are sick of their neglectful owner, Mr Jones, and inspired by the words of Major the boar, rise up against him. Under the leadership of the pigs, they set about creating a new world in which everyone will do their fair share of the work for a fair share of the rewards. But as time goes on, the pigs' ideas of "equality" increasingly conflict with the other animals'. It seems that though all animals are equal, some are more equal than others. Have the animals overthrown a tyrant in favour of something even worse?

Orwell published Animal Farm in 1945, using the form of a "fairy tale" to mercilessly satirise the brutal oppression of Stalin and his government. The novel was initially criticised for attacking Britain's wartime ally, but has since been vindicated by history and is now justly regarded as a popular classic. It has been adapted into many media, including a CIA-financed cartoon and a Pink Floyd concept album, and is immensely popular among refugees from oppressive regimes to this day. It's not for nothing that such regimes are called "Orwellian."

Peter Hall's adaptation, originally performed at the National Theatre, uses music and movement to bring this powerful and often chilling fable to the stage. The show is directed by Anna Carlson and Tom Wright in their first full production, with musical direction from James Hall. The large and talented cast promise to make this a colourful spectacle, portraying pigs, cows, chickens, ravens and even (whisper it) one or two humans.

Anyone wondering what 'ensemble work' in theatrical terms means would have seen an excellent example of this in YAT's recent production in the Studio of Animal Farm by George Orwell, nimbly adapted by Peter Hall. It was directed with confidence and imagination by Anna Carlson and Tom Wright. It was enlivened with lyrics by Adrian Mitchell and an appropriate score by Richard Peaslee, with direction of the small onstage band by James Hall.

This version of Orwell's 1945 novel was an ideal vehicle for this group of young actors, of varying experience and expertise, to perform in the confined space of the Studio, and it was a surprise to count up to twenty performers on stage at any one time. The grouping of the characters made for attractive tableaux against a pared-down staging of a back wall hung with sacking alongside a picket fence which was enough to suggest the action was set in a farm yard. Realistic animal costumes were not adopted, thank goodness; hints through hairstyles, subtle movements and gestures were enough to separate the sheep from the goats, horses from hens and so on. Significantly the pigs, who rise to the top of the animal democratic heap, were clearly identifiable by wearing their curly tails painted on their foreheads.

What a scary tale this is ! Orwell had the political foresight to read accurately what would happen in the Soviet Union after World War 2. It is probably unnecessary to outline to readers of Theatre the story of this allegory of how the downtrodden, starving animals rise up in rebellion against their drunken inefficient farmer and take over the running of the farm themselves, based on the highest democratic principles. " All Animals Are Equal" is their egalitarian slogan until the ominously named Napoleon banishes one of his henchmen, Snowball, and economic reality begins to bite. Despite the hard physical effort and deprivation of every animal, apart from the smooth-tlking pigs, nothing can save them from hardship and even death, most tellingly portrayed by the demise of Boxer, the once powerfully strong cart horse. Napoleon's rule becomes more dictatorial and, in spite of the clever interpretation of his actions by his spin doctor, Squealer, the remaining animals and we, the audience, can clearly see that "some animals are more equal than others". For those of us who take an interest in recent and currently unfolding political events this production was an absorbing reminder to maintain one's guard.

The performances in this production were uniformly good and maintained a lively pace, never allowing attention to wander. Following tradition when reviewing a YAT production I shall not name individuals, which would be invidious and unnecessary in this case. The rendition of the songs was lively and it was interesting to note the early harmonious tunes gradually became more and more dissonant as harmony on the farm broke down. Effective lighting, bathing the stage in a red glow at appropriate moments, and cleverly arranged fight scenes added to the atmosphere of the whole piece.

I was on the edge of my seat throughout and I am delighted to say - and it's not often that I say this - that diction was excellent throughout. Well done yet again YAT and congratulations to all who contributed to the success of this production, through choral work, physical workshops and so on. The hard work paid off. And now I can't wait to go Into The Woods with YAT in the Main House from 12-15 November. That will be something to look forward to during the gloomy winter months.