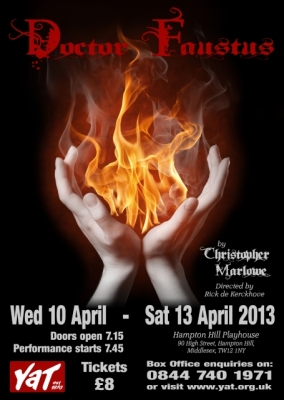 Restless for knowledge and with his insatiable desire for notoriety, Doctor Faustus forsakes scholarship and makes a pact with the devil, signing away his soul to Lucifer in return for twenty-four years of pleasure, the chance to become all powerful and to perform the black arts. With Mephistopheles as his servant he is propelled into the heady world of the rich and famous but when the time comes to repay his deed has it all been worthwhile?

A chorus of narrators transports us across oceans and back in time as we see Faustus tempted by the seven deadly sins; conjuring up Alexander the Great and Helen of Troy; tricking the Pope and his cardinals and performing to emperors, dukes and duchesses.  As the battle rages for his soul, Lucifer, Beelzebub and an army of devils are called upon to make sure the good angels do not win back the soul of our tragic hero. Meantime a group of comic characters try to emulate the conjuring prowess of Faustus, only to become the victims of their own meddling.

Christopher Marlowe's celebrated work is actually a curiously uneven play. It contains some of his most glorious verse, but also a deal of dross, particularly in the scenes where Faustus is having fun with "lesser persons", to gratify his ego in being given what he believes is his heart's desire. There are a large number of parts, but very few in which actors can build a character upon, but the play stands or falls upon its two main protagonists. The play may be uneven, but the Production was certainly not.

So I must start by declaring that in Rowan D'Albert (Faust) and Natalie Standing (Mephistopheles), we had two supreme artistes. I was, I confess, somewhat unhappy with an opening, 21st Century attired Chorus; this did not start the play with the punch it needed to attract our attention, but then I had only to hear a few lines from Mr. D'Albert to realise that I was in the presence of someone with compelling Stage Presence, possessing a powerful voice, which he knew how to use, plus an excellent command of the verse, along with a clear understanding of what he was saying. In this supreme performance, he managed to inject humour (yes, there are some funny lines), together with an unbalanced state of mind, bordering on neurosis and culminating in a fine rendering of the last speech before he is transported to Hell.

Natalie started low-key, which I think is right, then gradually and steadily built up her dominance over Faustus, working initially towards the scene where Faustus stabs his arm, which she played expertly; thereafter, the gradual control she exercised, and hence the real dominance, was skilfully done: we knew all along she was playing with him, and the pièce de résistance was her final speech to him before his descent to Hell, which was truly electric, and was where her vocal power came to full fruition.

These two actors have an enormous talent, and are surely destined for a great theatrical future.

Lest any readers should think I am dismissing others, let me hasten to prove otherwise. There were many performances to enjoy. Foremost amongst them were Tom Wright, Conor Moss and Anjum Dosaj-Halai, as Ralph, Robin and Wagner. Marlowe's comedy interludes are, frankly, tedious, and it does need attack and inventiveness to make them work; we got this from all three actors. We also got it in spades from Anna Carlson as the Horse-Courser, who took this lovely little part by the scruff of the neck and threw it straight at us. On another plane, but none the less for that, was Mark Williams, who gave a most impressive performance as the Old Man near to the end.

Others worth a mention were Jason Evans (the Pope) and Ollie Hickey (Emperor Charles V), and the 3 Scholars, who represent Faustus' last human contacts; these were quite moving and nicely under-played.

There were, it has to be said, some weaker moments: some poor diction at times, some inaudibility, and a few rather naff entrances. I have referred above to the large number of parts in this play with not much material to build a character on. However, that does not mean you just come on and go off when the script says you do; look at what you have got, however minor it may seem, and think how you can make a contribution, without overdoing it, within the context of the scene you are in, and keeping your character from entrance to exit. If you don't manage this, you will be noticeable for what you have not done, not for what you have.

In case that might inject too negative a note into this article, I have no hesitation in saying that the greatest achievement of this production was the discipline of the entire cast of 36, and their obvious commitment to it. Director Rick de Kerckhove deserves the highest praise for his own obvious commitment to the Play and his skill in staging it on a set which was more versatile than at first appeared: he has the courage not to move characters for the sheer sake of it: for example, Natalie was completely still for her first scene with Rowan - he was the one who moved around, and about, her, which is, to my mind, totally right and indeed vitally important to both roles at that stage. Rick's production contained many inventive touches - notably the microphoning of Lucifer and Beelzebub, which produced a very strong and scary effect, with the gift of a great opening line: "Christ cannot save thy soul, for he is just: there's none but I have interest in the same" ($1 million dollars for a line like that!) Above all, his vision was strong, consistent, propelling us firmly, as Faustus himself was propelled, towards the dénouement.

The lighting was stunning and fitted the production perfectly; it was one of the best I have seen at the Playhouse. I found out that Mike Elgey was responsible for the design; well, we know where our Professionals are.

Costumes were, for the most part adequate, but some things appeared to be missing: some Cardinals had skull-caps, some didn't, one actor had what appeared to me to be shorts on with red stockings. I am aware that expense comes into being, but there are limits.

I have said, in past YAT shows I have seen and reviewed that this Company is going from strength to strength; they are, to a great extent, the future of TTC. This production was far ahead of recent Main House TTC Productions, and any thoughts people might have about YAT being the cadet group of TTC with implications I need not expand upon, are, to my mind, totally dispelled. Far from learning from us, it is my opinion we can learn from them, and improve some of our own production standards which are, to put it blandly, largely in need of overhaul.